Wonderful Show! Naked In A Fishbowl

If you read this on a Monday night, then you have to wait another whole week to see one of the funniest shows around. Naked in a Fishbowl is a hilariously, spot on serialized look at the lives of 4 female friends and their circle of acquaintances (tickets). The June 7th show was these collaborators’ first back together as a group after performing this in 2005 – 2007 in various venues. But the audience doesn’t need to know any background at all, to step into the fun.

Let me start by saying that I really don’t like improv – as a rule. A pretty much a hard and fast rule at that. I know it is an art, but to me it is like Mime or Jackson Pollock, just because it is good, doesn’t mean I have to like it. But this show breaks every preconceived notion I have about improv and what it is and can do. This show is standup and cheer great. 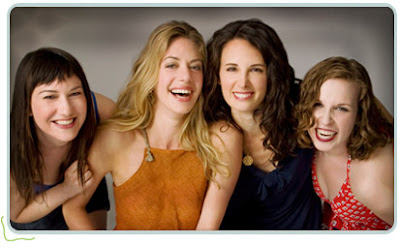 Katherine Heller, Brenna Palughi, Lynne Rosenberg, Lauren Seikaly play longtime friends, one married with children, one divorced, one uncomfortable with new found, albeit minor, fame and one yoga instructing single woman. Together, they play off each other with an ease and seamlessness that must be rehearsed, but it is all done as improvisation. The audience would never know, except on the rare occasions that they crack each other up, but even these feel totally authentic as it would if you made friends laugh.

The show I saw on Monday concerned the four women getting ready and then attending a benefit event for planned parenthood. The interplay, the tardiness and annoyance, the question of outfits, it feels like you are spying on old very funny friends – who happen to be going through their own personal emotional issues.

Molly Knefel joined the cast as Alice, a younger cousin of Sara (Katharine Heller). There is some expository background to keep everyone up to speed, but it is given easily as if catching friends up on what gossip they missed out on. Two other women, D’Arcy Erokan and Daliya Karnofsky, are in the cast list and will probably join soon. If the ease in which the cast brought in Molly Knefel is any indication, it will be smooth introductions all around.

These women discussed age, child bearing, appropriate child bearing age, strappy shoes, sex, lesbian sex, ex-husbands and boyfriends, Sarah Palin, difficulties of motherhood, money issues, yoga as life force and the changing nature of friendships without dropping the ball anywhere along the way. There were no pat jokes waiting to be reeled off, just interactions that were hilariously funny and sometimes touching.

There is none of the give us a situation and give me a feeling that screams “improv” to many people, and has many of them running for the exits. Except for the minimal sets, this might be any play, or any play where the inmates take over the asylum.

All four women are amazing, giving full rounded characters and are gracious is yielding the floor and the laughs to each other. You get the feeling that even if there wasn’t a house full of constantly laughing, applauding people, these four actors might still get together every Monday night a 7PM, just to make each other laugh. Naked In A Fishbowl is wonderful.

Naked In A Fishbowl

What works: These talented talented women

What doesn't work: nothing

What you get to brag about to your friends: There will be lines that you can quote for the next week