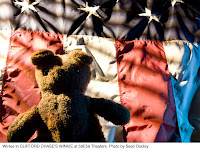 Clifford Chase’s Winkie, now at the 59E59 Theaters, looks at current absurdities in the name of homeland security. It is an area that, at first glance, seems ripe for parody. Winkie is a Teddy Bear come to life, and thrust into the middle of a man hunt for a Unabomber-type terrorist. This set up is given to the audience in the form of a 24 hour news channel’s special report, a medium where the real, the fantastic and the scripted meld into a blob of infotainment.
Elliot Hill plays reporter Dan Abrams, who provides the requisite hushed and serious British tone needed – everything sounds more serious with British intonation. Just as Dan Abrams grounds the show within the play, Mr. Hill grounds the actual play. He constantly brings the tone of the show back to earth when it threatens to dissolve into camp. Nick Paglino plays Clifford Chase, Winkie’s last owner, and provides the voice of Winkie – a twinkling and twee voice that every child has used for their stuffed animals. Mr. Paglino has a very difficult role to manage. He has to provide both the background of Winkie – and voice the mainly reticent Bear. Mr. Paglino does a great job here by playing it perfectly straight. 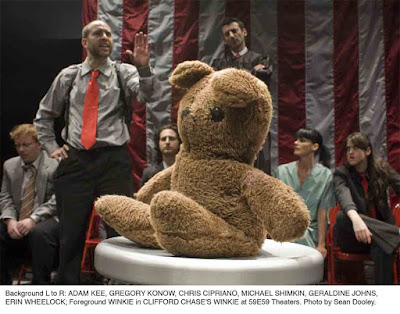 The rest of the surprisingly large cast is giving huge room to camp up this over the top tale, since the story is kept in check by Elliot Hill and Nick Paglino. The ensemble does a admirable job with the material. In particular, Adam Kee as Winkie’s court appointed attorney is hilarious.

But there isn’t enough story to stretch out this parody for the full 90 minutes. Once the easy targets are mocked (and mocked well) the play has nowhere to go. Sure it’s funny that a Teddy Bear is arrested as a terrorist, but once Joan Rivers has actually been held in Costa Rice as a possible terrorist – reality has actually passed parody into the theater of the absurd.

The playwright understands the limitations of the material, and moves the show into Winkie’s story. Unfortunately it is a mawkish story of lost youth, which is both bizarre and unbelievable. While the audience can buy into the story that the Teddy Bear has come alive, it is a step too far to listen to him rhapsodize about his first bowl movement.