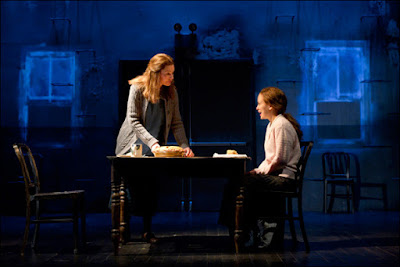 The newly reworked and fully re-imagined production of Carrie features music by Michael Gore, lyrics by Dean Pitchford (Academy Award winning composer and lyricist for the original film Fame) and a book by Lawrence D. Cohen(who also adapted the 1974 novel by Stephen King for the 1976 Brian DePalma film).  Directed by Stafford Arima, performances for Carrie began January 31, 2012, at the Lucille Lortel Theatre (121 Christopher Street, NYC).  The official opening night is set for March 1, 2012; the show was originally scheduled to run through March 25, 2012.

It was also announced today that a new Front Row Rush policy will be in place for all performances March 27 – April 22, 2012.  Two hours prior to each performance, tickets for the front row of the orchestra (11 seats) will be available at the box office for $20, to anyone under the age of 30, by showing a valid photo ID (one ticket per person).  This program is in addition to MCC Theater’s longstanding $20 Under 30 program, which is still available in advance, online and in person at the box office.