I recently took in London-based artist Kevin Francis Gray's solo exhibition at Haunch of Venison Gallery (550 W. 21 St., 10011).
.
He is an exceptional sculptor.   The show had 3 items that were fascinating.
.
The first was a marble sculpture.  Mr. Gray had created it in clay, and then it was created in marble in Italy.  After it was created, it was hand sanded to get an amazing sheen.  It was beautiful.
. 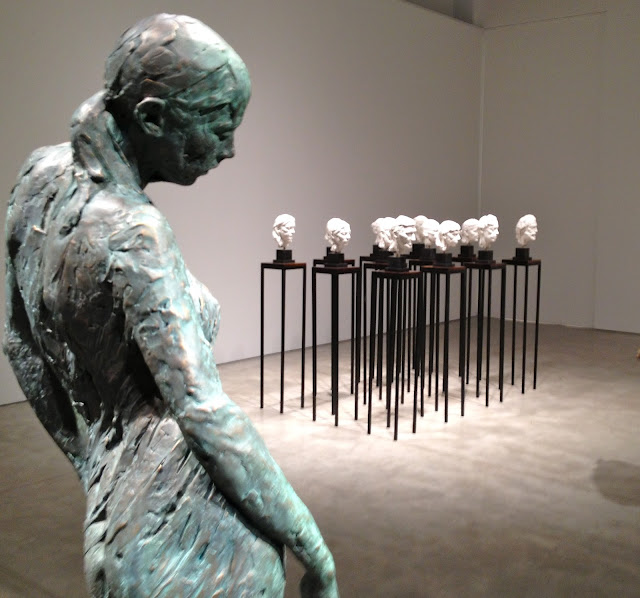 The second picture includes 2 different pieces.  The first in the foreground is a sculpture of a dancer, done in a more rugged technique than the marble.  In the distance are a set of heads created in porcelain.  These were people from the street that sat for as long as they could before they had to head out for a fix or a drink or for work.  They were each done in two to twelve hours.
.
It was a cool show.
Gallery: Haunch of Venison
550 West 21St. New York New York, 10011

Through September 29th.
Posted by Scott at 11:08 PM No comments:

With cold weather and the threat of gentrification looming, a group of Coney Island die-hards take to the boardwalk for one last summer fling. A panoramic tribute to, as one character puts it, a world that is “all going away," CONEY presents a diverse cast of twelve characters spanning in age from 13 to 73, including carnival barkers and freakshow stars eking out a living; working class friends looking back at a lifetime of courtships on the boardwalk; and a young couple with an obsession for the film The Warriors on a touching first date.  Between the Sideshows at the Sea Shore, the Wonder Wheel, Nathan’s Hot Dogs and Shoot the Freak, dreams are conjured and hopes are dashed in acclaimed playwright David Johnston's love letter to America’s original national playground.

I have reviewed PJ Sosko and Stephen Speights before and they are excellent performers.
Posted by Scott at 11:55 AM No comments: 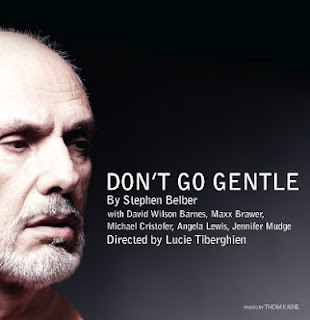 MCC THEATER is also pleased to announce a series of talkbacks taking place directly after the following upcoming performances of Don’t Go Gentle:

Don’t Go Gentle follows Judge Lawrence Driver (Cristofer): conservative powerhouse on the bench, failure at home.  Now retired, widowed, and seeking redemption, Lawrence volunteers to do pro bono legal work with a young African American woman, Tanya (Lewis), a vulnerable ex-con with a troubled teenage son, while working to repair the increasingly complicated relationships with his own adult children.  But do-overs don’t come easy, and when his newfound generosity is perceived as condescension, Lawrence runs the risk of losing everything.
Posted by Scott at 9:00 AM No comments:

Upcoming: The Freedom Of The City 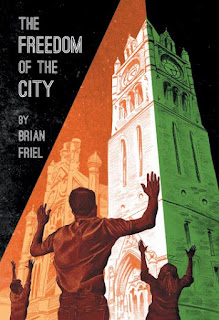 Off-Broadway's Irish Repertory Theatre launches its 25th Anniversary Season with Brian Friel's THE FREEDOM OF THE CITY – with previews set to begin October 3, prior to an official press opening October 14 on the Irish Repertory's Francis J. Greenburger Mainstage (132 West 22nd Street). Performances are set to run through November 25. Ciarán O'Reilly directs.Director Ciarán O'Reilly helmed the company's recent productions of Eugene O'Neill's BEYOND THE HORIZON and THE EMPEROR JONES (Joseph A Callaway Award winner for Direction; Lucille Lortel, Drama Desk, Drama League, and Audelco nominations). As an actor, he co-starred in Irish Repertory's 2011 revivals of Brian Friel's DANCING AT LUGHNASA and MOLLY SWEENEY.Set in Derry, Northern Ireland during the aftermath of a civil rights meeting, THE FREEDOM OF THE CITY revolves around an inquiry into the shooting by British soldiers of three marchers as they emerged from the Guildhall. As the inquiry continues, with testimony from 'expert' witnesses, the play relives the real events that led to its institution. When the police disrupt the peaceful protest, three unarmed strangers, Lily, a middle-aged mother of 11, and Michael and Skinner, two young men, take refuge from the streets and find themselves inexplicably in the Mayor's Parlor. As the three settle in to the Lord Mayor's opulent office, word spreads about the "occupation" of the Guildhall. The motley trio is transformed into a band of armed and desperate terrorists, a fiction that is taken up by the church, the media, the army, and nationalist balladeers, all of whom use the myth for their own diverse ends.THE FREEDOM OF THE CITY features Cara Seymour (Mike Leigh's ECSTASY and GOOSE-PIMPLES, Noel Coward's PRESENT LAUGHTER) as Lily; Joseph Sikora (THE CAINE MUTINY COURT-MARTIAL, "Boardwalk Empire") as Skinner; and James Russell (CTV's hit series "Comedy Inc.") as Michael; with Ciarán Byrne; Clark Carmichael; Christa Scott-Reed; John C. Vennema (THE CRIPPLE OF INISHMAAN, BELLS ARE RINGING) as Judge; Craig Wroe; and Evan Zes (MAN AND SUPERMAN).
Posted by Scott at 5:46 PM No comments:

Email ThisBlogThis!Share to TwitterShare to FacebookShare to Pinterest
Labels: Freedom of the City, Irish Rep, Upcoming

I took an Art Tour last night and saw some amazing work.  One of the most interesting was at the Marianne Boesky Gallery, called "The Vanishing Point" by Diana Al-Hadid.
.
Diana works with negative spaces in sculpture, which creates art that pulls you into the piece.
.
In the Suspended After Image, she basis the start on a fresco from The Prado - a robe from an unknown author.  She then casts the robe, minus the wearer, as the column that anchors the piece.
.

In At The Vanishing Point, she removes the people from a fresco by Jacopo - The Visitation.  This focuses the work on the plane and structure of the mountain landscape.
.

In her painting, which she doesn't title, she explores the effect of layering and removing excess.  Her work was fascinating and moving. 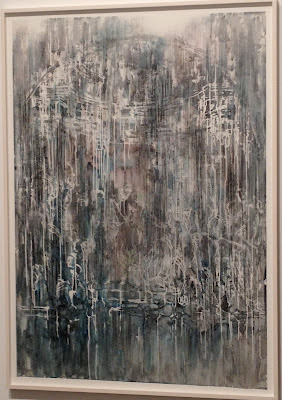 Job does Heavy Lifting at the Flea

Job, now playing at the Flea, is a reasonably accurate retelling of the biblical story of Job, from the Old Testament.  As such, it is not a laugh riot.  The adaptation by Thomas Bradshaw follows the trials of Job (played in full voice by Sean McIntyre) as he is tested in his love for God.
.

Job embellishes the backstory wherein Satan (the always excellent Stephen Stout) is given full reign to challenge Job’s fidelity to God, played by Ugo Chukwu.  In Thomas Bradshaw's version, God’s sons, Jesus and Dionysus, function as witnesses to the bet.  Grant Harrison and Eric Folks play the sons of God as bickering brothers, self absorbed and uninterested in human endeavors.  It is a funny diversion that pops up occasionally during the show.  And the diversion is necessary because Job has more than its share of tragedy.  The Gods are unconcerned with the humans, except as a reflection of themselves.
.
Job, a penitent and honorable man, with full faith in God is subject to tests that no mortal should have to endure.  One of Job's sons graphically kills and then rapes Job’s daughter.  His other son witnesses this and kills his brother and then himself.  Job’s wife, Cleo Gray bringing the inconsolable woman vividly to life, leaves him when he cannot renounce God.
.
But for Satan and God, this isn’t proof enough of Job’s faithfulness; Satan is allowed to test him again – this time with physical pain.  Job’s eyes are gouged out and he is castrated by the same men he once sat in judgment of.  But still Job puts his faith in God.  Then his friends turn on him – he has lost all, his family, his wealth, his health and his friends, but he will not curse the Lord.
.
Job does complain, he demands to know why this is happening.  And God ultimately appears to him, not so much out of love but because he is tired of the whining.  God doesn't answer Job's questions, he merely states that man cannot question such a being.  Ultimately God restores wealth, health, a large extended family and long life to Job.
.
The moral of the Bible story is that sometimes bad things happen to good people and we cannot fully understand why, but Job is a long way to get there.  We know that Job suffered but did not forsake God.  However, in seeing the whole thing acted out – well, it is a little disconcerting.  What about the children who were driven to incest and murder for no reason but to test the father?  What about the wife, who renounced God after this happened to her family?
.
And all this pain and suffering for a celestial bet?  I had to go back to my Bible to check this, and sure enough it is right there (Job 1:11).  Job is excellently acted, well put together and nicely paced (directed by Benjamin H. Kamine) but you don’t leave the theater all bright and cheery.