59 E 59 Theater C is transformed into a Big Band venue for the new show The Anderson Twins Play The Fabulous Dorseys.  The venue doesn’t exactly match the dimensions of old, but the band more than makes up for it.  A six man combo featuring the Anderson Twins lays down amazing tunes, transforming the theater into a club in the blink of an eye.
.
The story of the Dorseys is told via the 1947 film The Fabulous Dorseys, interludes are played on a screen high above the stage.  The Anderson brothers engage in a bit of artificial sparring in homage to the Dorseys, however the less said about their acting ability the better.  The brothers' musical abilities, on the other hand, are stunning and more than make up for a few awkward moments.
. 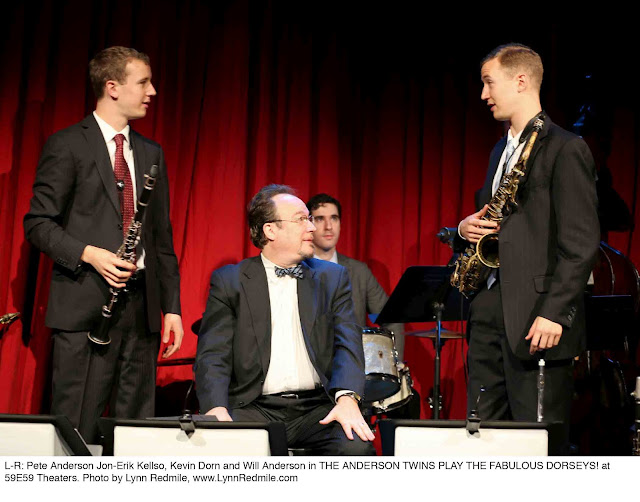 The combo plays a number of Dorsey era tunes, with the original arraignments, those by Sy Oliver prominent among them.  Sy Oliver has an interesting back story not mentioned in the show – he was the first African American arraigner for a white Big Band.  It is a treat to hear these songs played so vibrantly and so fresh.
.
The band includes Peter and Will Anderson playing a variety of instruments; clarinet, flute, bass clarinets and various saxophones.  Also featured are Jon-Erik Kellso on trumpet, Kevin Dorn on Drums, Ehud Asherie on Piano and Clovis Nicolas on base – although there slight modifications due to availability during the run.  Each of these men seemed excellent on their instruments.
.
Having never heard Big Band’s live, the show was a revelation to me.  The musicality and energy was elating.  As with other 59 E 59 musical shows, the audience is encouraged to bring in drinks and enjoy the atmosphere.  At about 90 minutes, with an intermission, it was a perfect length for a new comer to the genre.
.
The Anderson Twins Play The Fabulous Dorseys is an wonderful evening, you step back into a lost time and forget about your troubles for a while.  You will be in good company, I have rarely seen a more entranced and entertained audience.
.
And, so you don’t spend the first 20 minutes trying to figure it out, the Anderson boys look like younger, thinner Manning Brothers (Eli and Payton).
The Anderson Twins Play The Fabulous Dorseys
Combo: Peter Anderson,  Will Anderson, Jon-Erik Kellso, Ehud Asherie, Kevin Dorn, Clovis Nicolas
website
Posted by Scott at 6:00 PM