Lewis Black On Form on Broadway

Running on Empty is the new Lewis Black show on stage now at the Richard Rodgers Theater.  For those of you that only know Mr. Black from his outbursts on The Daily Show, you will be pleasantly surprised.  His trademark humor and observations are present, but his quick tantrums are more spaced out, used to punctuate stories and humor.
.
Mr. Black is a humorist of stories and observations, not quick one line jokes.  He delights (or wallows – depending on your viewpoint) in the absurdities of modern life and the indignities of the average man.  Were it not for a razor sharp sense of irony he would be that cranky old man screaming for you to get off the lawn.  In one very funny bit, he actually played the cranky neighbor as himself as a child.
. 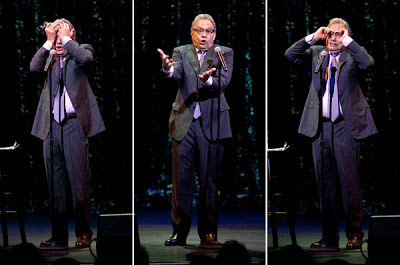 Some of his signature long form material has focused on politics over the years.  Running on Empty is not focused heavily on this.  Like many of the audience, politics has long passed humorous and moved on to pathetic for Mr. Black.  He still brings some attacks on Republican and Democrats, which are hilarious, but he doesn’t dwell.
.
Much of the evening was spent on generational disparities.  These included easy targets – who expected him to actually like facebook, and some unexpected ones – he finds his own generation unmotivated and happy being lazy.  He seems to both love his  smartphone, and simultaneously dispare that all of our innovational expertise has been spent on such a individualistic device - we ended space travel but can stream porn into our pockets anywhere in the world.
.
But as always, Lewis Black wandered around different topics with surprising ease.  He elicited laughs consistently and mercilessly, but without malice towards any group – bar politicians.
.
Running on Empty is funny as hell. If you can get tickets, go.
-------
Runny on Empty
Written & Performed: Lewis Black
Additional Material: John Bowman
Website
Posted by Scott at 11:21 AM