Bedlam’s St. Joan is a Whirlwind of Power

Clocking over two and a half hours, George Bernard Shaw’s St. Joan can rarely be described as breakneck, but the Bedlam theater group upends all expectations and brings a vibrant and joyful St. Joan to life. The four actors tear into the play with the enthusiasm and restraint of a 5 year old on Christmas Morning.  This is no tale of a woman laboring under the heavy shadow of God, but the story of a 14 year old girl caught up in the jubilation of the moment. 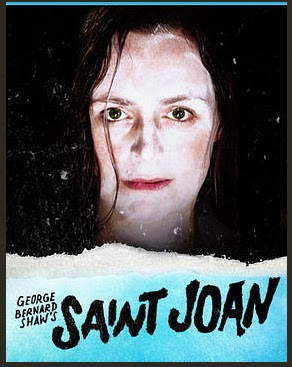 Andrus Nichols plays the young Joan with boundless energy, limitless optimism, deep faith and no restraint.  The characters around Joan respond to this infectious girl warrior by being swept up in the moment, ready to follow her anywhere.  I came into the show with visions of historical exposition and leaden monologues, but in moments my fears proved entirely unfounded.  This Saint Joan is a force of nature, if not God.  She wears her heart on her sleeve.  And though we can question her decisions, we cannot question her devotion to them.  Joan of Arc can come off as a dull, pious scold, limited by her single-minded determination.  Ms. Nichols plays this role so differently that you wonder if you ever seen the role before.

She is supported by three wonderful actors, who play all the other roles.  Each of these men has a signature role (or two), but in each and every case, they contribute to racing the play along

Edmund Lewis brings a diffident and cautious demeanor to the role of the Dauphin, and a hungry bloodlust to the role of John de Stogumber.  The tie between the two characters is a single-minded purpose, free from any intellectual reflection or doubt.

Eric Tucker as Warwick must carry the author’s moral and lesson.  He does this so well that Warwick doesn’t seem lecturing, but rueful.  He laments the passing of the feudal system as a passage to anarchy.  And Mr. Tucker’s opening Robert de Baudricourt sets the manic energy perfectly in the opening scene.
The final actor is Tom O’Keefe who brings to life various characters from the church.  These pious men are content to let Joan lead troops into battle, but unwilling to allow her to rejoice in her faith.  The physical reality of her, she who dresses like a man and claims to speak directly with God and the Saints, is too much of a heretic against the structure church and it’s monopoly on the Lord.

There are no sets as such in this wonderful St. Joan.  A chair is used here, a sign there.  But the beauty of the staging is the wild use of the space.  At both intervals, the seating is altered so that the audience is confronted with the characters in a new way.  What starts as a traditional “stage front” arraignment morphs and the audience is swept into a new interaction with the piece.  With other shows, it would often seem gimmicky, but with this show and these actors, it works completely.  Kudos to Director Eric Tucker (the actor mentioned above) and the entire company for throwing themselves so wholeheartedly into this piece.
------------------------
St. Joan
Playwright: George Bernard Shaw
Director: Eric Tucker
Cast: Andrus Nichols, Edmund Lewis, Tom O'Keefe, Eric Tucker
website
Posted by Scott at 12:33 PM