Billy & Ray Sheds Light and Laughs on Double Indemnity, but Preserves the Mystique

Billy & Ray, now at the Vineyard Theater, tells of the unlikely paring of famous director, Billy Wilder and Raymond Chandler.  Together these two produced one of the first and best of the film noir vehicles, Double Indemnity.
.
The play opens with Austrian transplant, Director Billy Wilder, played with amazing energy by Vincent Kartheiser, breaking up with his writing partner.  He is determined to bring Double Indemnity to the screen.  The story, from the novel by James Cain, is considered unfilmable due to the surfeit of content that raises flags with the production code.  Billy convinces the studio producer to bring in hard-boiled detective writer Raymond Chandler to help with the script, this was Chandler’s first film work.
.
But it turns out that Raymond Chandler, in the flesh, is nothing like his characters.  Chandler is a broke, retired schoolteacher, churning out short stories for rent.  Chandler is brought to boring, straight-laced life by Larry Pine.  Chandler has no use for Cain’s over sexed novel, Billy’s vulgarities or the studio high life.  But he does need the money and he writes amazing dialog. Billy and Ray shows how this odd couple never become friends, but forge a working relationship to get Double Indemnity pass the censors by making an intelligent, adult film.
.
Double Indemnity is one of the great American films, and this story would be fascinating even without back and forth between this two brilliant and difficult men.  But their interaction drives the story humorously and ingeniously to life.  Mr. Kartheiser, as Billy Wilder, the play forward with his frenetic energy and restless nature.   His energy and verve make up for a horrible accent in the first few scenes, where he seems to be channeling Austrian German accent via Dublin.  Once he gets into the rhythm of the piece, his voice migrates across the channel to Vienna and settles down.  Perhaps as the show progresses this minor complaint will prove obsolete.
.

Sophie Von Haselberg plays Billy’s secretary, Helen.  The daughter of Bette Midler and Martin Von Hasleberg, she is perfect, channeling the sass of Eve Arden with the mildly maternal instinct of every great secretary.  Her resemblance to her mother is uncanny. Drew Gehling plays the producer Joe Sistrom, balancing his desire to bring this story to life against the day-to-day B pictures the studio shoves at him (“The Hitler Gang”).
.
Billy and Ray looks beautiful, the offices at Paramount brought to life by Charlie Corcoan.  Watching Vincent Kartheiser lean out of his window to heckle Bing Crosby is one of the small moments that make this piece so perfect.  Legend Garry Marshall directs the piece with a familiarity of the Hollywood system, albeit with a little too much sit-com familiarity.
.
Billy and Ray is a love letter to Hollywood in general and Double Indemnity in particular.  If you have never seen the movie, you will want to after seeing Billy and Ray, and that is high praise indeed.
.
Billy and Ray
Playwright: Mike Bencivenga
Director: Garry Marshall
Cast: Drew Gehling, Vincent Kartheiser, Larry Pine, Sophie von Haselberg 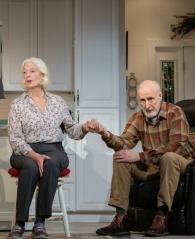