What is the best way to present a tale of gay liberation in a very conservative society? If you want to reach a wide audience, and have them listen, then make it entertaining. The theater company Quendra Multimedia has done just that with 55 Shades of Gay: Balkan Spring of Sexual Revolution.

55 Shades is set in Kosovo, a small and struggling country, where European Union money comes with an expectation of European values. In a small town, Italian aid money supports the building of a new condom factory that will provide much needed jobs for the population. An Italian working on the project has fallen in love with a local Kosovan man and requests permission for marriage. The problem, they are both men in a deeply homophobic town and country.

The request for marriage sets off a furious search for some reason, any reason, to outlaw it. But the town mayor and then the country’s Prime Minister realize that the Constitution, created by the EU and signed to stop the war of independence from Serbia, includes a clause that allows marriage between couples of the same gender. 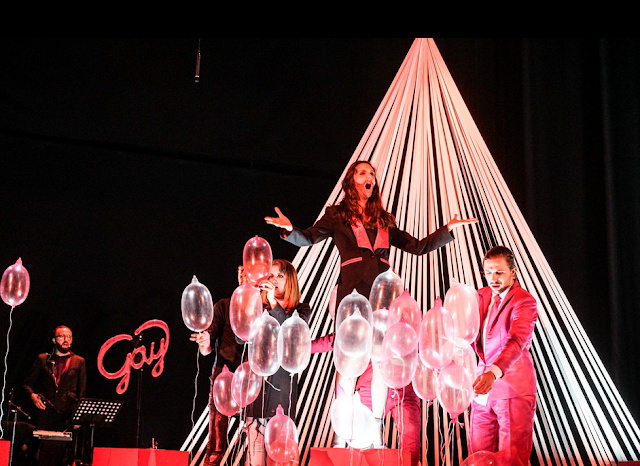 To explore that frustration of the locals, the plays produces a series of vignettes, songs and media displays trying to distract the Italian from marrying the local man. That frustration is not reserved for the gay couple, but spreads to the European Union representatives that try to impose their values, the bourgeois artists that back the family laws of heterosexuality, and the Catholic and Muslim churches, finally united in opposition to something.

55 Shades is presented primarily in English with some Albanian and with English dialog is projected on the rear wall during the show. The 5 players are frenetic and focused, bringing a sense of energy and playfulness that softens the possible hard edges of the show. It is billed as a contemporary burlesque and uses the variety format to skewer the bigotry of the locals, the smugness of the EU and the stubbornness of everyone involved.

But first and foremost, the company knows this show has to entertain, and 55 Shades does a great job of it. The pace is fast and quick. Some of the techniques hit their mark excellently, like the tree outside the mayor’s office which listens on the proceedings and a few others don’t. But the play more often takes flight than not. It is definitely not a piece for those that like their shows deliberate and linear. But if you are looking for a flight of fun and expression of freedom, 55 Shades of Gay: Balkan Spring of Sexual Revolution provides that.