Grand Horizons: Everyone Gets a Chance to Shine in this Dramedy

Grand Horizons has a fantastic cast. Anchored by Jane Alexander, the talented group of actors breathes life into Grand Horizons, allowing it to deliver beyond the boundaries of the page. Because what limits the play is baked into the script and format. 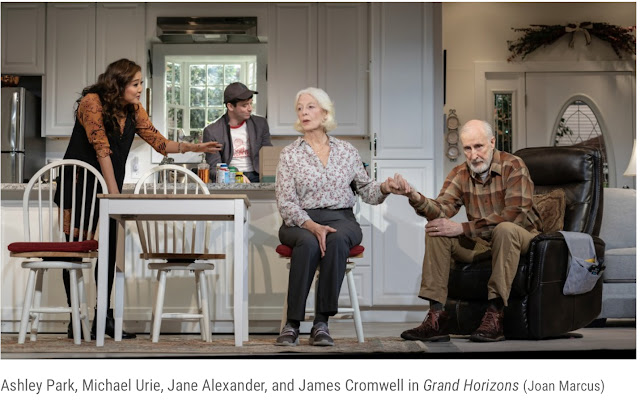 Grand Horizons is the story of an elderly couple, Nancy and Bill, played by Jane Alexander and James Cromwell. The story opens as they go through the ritual of breakfast in their new “senior living” apartment. During this silent ritual, the ennui of Nancy is palpable, cumulating in a request for a divorce. The request is met with a simple acknowledgement from Bill.

Next we are introduced to the two sons of the couple; Brian (Michael Urie) the gay, overly dramatic younger son and Ben (Ben McKenzie) the older, structured brother. With Ben is his wife, Jess (Ashley Park) a former counselor, who wants to work on the parental issues. The children try to understand exactly what has caused this change in their parents’ relationships, but Nancy and Bill are not helpful. This leads to a great deal of comedic tension, and bit of character development of Brian and Nancy.

After the intermission, we are introduced to Bill’s lady friend Carla (a welcome Priscilla Lopez). Nancy explains how to take care of her husband to the new girlfriend and Carla suddenly sees what she is signing up for. In the second half Ben McKenzie and Ashley Park are also giving scenes to shine in.

Grand Horizons plays like a comedy-drama TV show, which may or may annoy the viewer. The format and timing makes it seem like one just watched the first two episodes of a pretty good series. I’d be interested in what happens to Nancy and Bill next. But it doesn’t deliver a full punch as a play. We get a fantastic cast where everyone gets a scene or two where they get to shine. Only Jane Alexander gets the chance to develop a character, and she is fantastic.

I can’t fault the cast, they are nearly perfect in execution. And Director Leigh Silverman creates a pace that both allows the action to play out naturally and doesn’t ever get bogged down. Playwright Bess Wohl has created a detailed and interesting story, but it left me wanting to know what happens in the next few episodes.