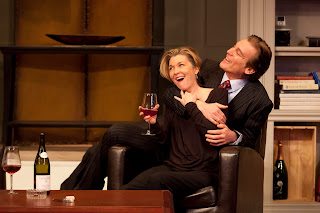 A Perfect Future is a darkly comic and provocative play that explores the question of whether people can be married and truly love each other when their political persuasions are diametrically opposed.  This high-society evening is about to turn into a night of sexually charged mind-games that could change their lives forever.   New York power-couple John and Natalie are hosting a dinner for Elliot, a friend from their days as college radicals. Also invited to the party is Mark, a straight-laced young man from John’s risk management firm. With the help of a few too many expensive bottles of wine, the group’s past and their long buried secrets resurface. Over the course of this raucous evening, their basic belief systems are upended, as the four must come to terms with each other’s true politics and behavior.
A Perfect Future will play the following schedule February 4 – 27:  Tuesdays – Fridays at 8:00 p.m., Saturdays at 2:00 p.m. & 8:00 p.m. and Sundays at 3:00 p.m. & 7:00 p.m.  Please note:  There are no matinee performances on February 5 & 6.   Beginning February 28, the schedule will change to:  Mondays & Tuesdays at 8:00 p.m., dark on Wednesdays, Thursdays & Fridays at 8:00 p.m., Saturdays at 2:00 p.m. & 8:00 p.m. and Sundays at 3:00 p.m. & 7:00 p.m.
Posted by Scott at 4:37 PM

Email ThisBlogThis!Share to TwitterShare to FacebookShare to Pinterest
Labels: A Perfect Future, Upcoming