At the 59 E 59 Theaters, a very funny throwback show is going on. Instructions for American Servicemen in Britain, is a Music Hall style review that travels from humorous to hilarious. The piece plays off a 1942 US Army pamphlet of the same name that tried to explain the British to American servicemen.

The audience is treated as a newly arrived squadron of Army Air Corps being briefed on the traditions of the British. The three man cast is excellent and also wrote the story: Dan March, James Millard and Matt Sheahan. They each play a main character and occasionally bring secondary characters to life.

The play doesn’t have an overarching theme, but plays off a series of vignettes that flow as information to the new troops. All are funny, but some are hilarious. Matt Sheahan’s explanation of the British monetary system in the forties - the time of shillings, pence and farthings - is confusing, impenetrable and wildly funny.

Dan March’s American Colonel is the epitome of a period of US bluster and self-importance. He is the ugly American that makes you laugh both with and at him.

James Millard plays a perfect American guide, trying to bridge the differences, keep the peace and move the training along, without offending either side. Mr. Millard also indulges in the odd British tradition of dressing up in female drag and acting with broad farcical effect. It is dated and silly, but still oddly charming and humorous.

The audience loved the show, despite a wide range of ages. The three man troupe engages in a lot of audience banter. To their credit, they are able to work both when the audience joins in, and when they have a bunch of stiffs sitting there.

Instructions for American Servicemen in Britain is a slight and dated show, but somehow it works even better as a period piece. Today the jokes would be stereotypes and not funny, but here, taking the piss out of both sides, it is all obviously in good fun.

Norma Jean Baker of Troy (an impression, not a review)

Well, that was weird as hell!


I went (to the Shed) and saw a show last night. It was called Norma Jean Baker of Troy. And starred one of my all-time favorites, Ben Whishaw and Renée Fleming, an Opera Star in the best sense with an amazing voice.

It was a show, not a play. More a poem of dance and obsession. It reminded me of the movie Howl, where James Franco recites the poem, as Alan Ginsberg, and the poem plays out around him in action, occasional cartoon and history. Howl is great.

Norman Jean Baker of Troy is not great. It has some great moments. Ben Whishaw is great as always. He has an intensity and voice and movement that is mesmerizing. It is used here to a hypnotic effect. Renée Fleming’s voice is similarly hypnotic and haunting. Her voice is pure energy, rising and falling like a third person in the room.

Ben Whishaw recites the lines to a transcriber, Renée Fleming. He describes the fall of Troy substituting Norma Jean for Helen. But is a reflection, a simulacrum, a cloud of Norma Jean (the cloud analogy is used over and over and over again). One that Arthur of Sparta and New York (Arthur Miller, Marilyn Monroe’s 3rd husband), attempts to recover.

Norma Jean is, according to this told rendition, is held by the gods – not in Egypt as in Euripides poem, but at the Chateau Marmont. NJBOT continues in this tale for ninety minutes. The story-teller brings in the story of Persephone as well. All of these women loved and hated and held for their beauty.

As the poem progresses, Whishaw is slowly, very slowly, transforming into Marilyn in her iconic seven-year itch white dress. And Renée moves from simply transcribing to telling the tale and transcribing and singing and helping with make-up.

It ends, as it must, with Whishaw overdosing and going to sleep.

How is it? Well, I loved it and hated it at the same time. Ben Whishaw and Renée Fleming are unimaginably good, because you simply cannot believe it could hold your attention, and it does. Ms. Fleming’s voice is like nothing I’ve ever heard, but I am not an Opera fan.

And the same time, more than a few people walked out.

As for The Shed, it is way too cavernous for this play. The props were human sized and yet so far from most of the people you knew who the pictures were only because you knmow it is Marilyn Monroe. They need to understand how to use the space. The shows at the Park Avenue Armory give me hope for the space.
Posted by Scott at 10:25 AM No comments: 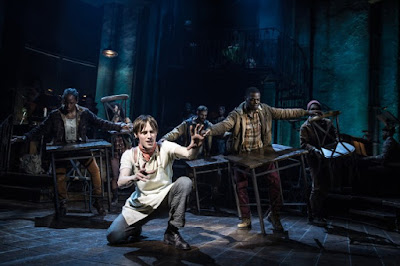 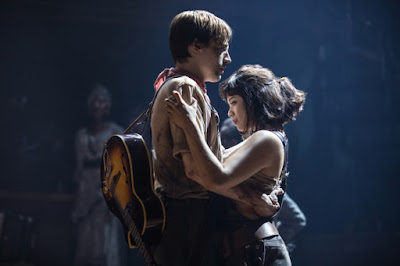