Cryano Explodes with Passion at BAM

Wow.
Cyrano de Bergerac is playing at BAM and it is beautifully intense and poetic. As Cryano, James McAvoy burns with a heat that enflames the neutral palette on stage. Cyrano de Bergerac is acted in "spoken word prose". That is my best description of it. Cyrano has a cadence, rhythm, and language all its own. Translated from the French, with also had a unique cadence in 1890s, the dialog reinforces Cryano’s love of language, while also distancing him from other characters in the play. Like Shakespeare, the dive into a new speech pattern takes a bit of adjustment but is then it is captivating.
As Cyrano, James McAvoy is mesmerizing and impossible to ignore. He strides the stage demanding attention and receiving it. He dominates whether sitting, standing, or fighting.
Nearly all of us know the outlines of the story, Cyrano de Bergerac is in love with the fair Roxanne, but she is infatuated with another, Christian. Roxanne is blind to Cryano’s affections because they have been friends from youth. Addtionally, Cryano describes that no one could love him, nor even see him fully due to his expansive nose. His nose is a sight to behold as described and joked about. In this play Cryano’s nose, his giant protuberance, his defining feature is described, but not depicted on McAvoy’s face.
Roxanne, Cryano’s cousin comes to him with tales of love. Cryano allows himself to believe the target might be himself. He is silently crushed when Roxanne revels that target is not Cryano but is Christian, a youthful handsome man. Not only is Roxanne infatuated with Christian, but she implores Cryano to take care of him in the military they both are part of.
Roxanne (played wonderfully by Evelyn Miller) is the light of warmth and charm. It is easy to understand Cryano’s love. Like Cryano she is alsot in love with language and words. She entreats Cryano to have Christine write her letters of love. But Christine is at sea using words to describe anything. And so Cryano writes Christine’s letters to make Roxanne happy.
The famous scene where Cryano speaks for Christine to Roxanne is carried out with precision and emotion. The scene plays out in a series of musical chairs allowing separate conversations to happen on the same stage. Eben Figueiredo is Christian - the handsome but witless suitor of Roxanne. His love perhaps not less full than Cryano’s, but he is useless in documenting it in a way Roxanne can appreciate.
But rich and powerful De Guiche (a slimy Ton Edden) desires Roxanne as well. Seeing Christine’s love for Roxanne as a block to his own salacious intentions, he sends Christine (and Cryano) off to war. Where Cryano promises to Roxanne that he will get Christine to write every day. Letters that he writes, and that further inflame her love.
War means tragedy. And tragedy in this case means that Christine falls in battle. Christine’s early death is amplified by his (actually Cryano’s) letters and dooms Roxanne to live alone with his memory. Tragedy also means that Cryano does not reveal his actions or intents until it is too late.
This new version is by Martin Crimp and directed by Jamie Lloyd. I have never seen the original or a recent version, but I was captivated by this Cryano de Bergerac. I’m afraid I have be spoiled and will never see a different version that is this spellbinding.
Cryano de Bergerac | Playwright: Edmond Rostand, with new version by Martin Camp | Director: Jamie Lloyd | Cast:
James McAvoy, Evelyn Miller, Eben Figueiredo, Michele Austin, Veneeka Dadhria, Adam Best and Nari Blair-Mangat
website

Power and Impotence at The United Nations

Thirdwing’s new production of The United Nations: The Border and the Coast playing at The Wild Project in the Lower East Side, is funny, thoughtful, and captivating to watch. The show reveals its hand slowly but steadily. The conflicts running through the show aren’t announced with giant signposts. Instead, the conflicts grow organically, as a result of actions not as a cause of those actions.

The immediate incident that propels the story is a military coup in Burkina Faso and the ensuing UN work to help, somehow. The show looks at how international support and the UN machinations effect the outcome. But these discussions are only an introduction to the action; it is not a dry and unemotional work about the UN’s Mission. 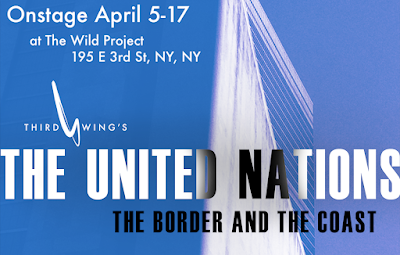 To provide help to this small African country, the German representative must convince his Russian counterpart to move support through the Security Council. In the Council, a veto from Russia or the other 4 permanent members will stop any further action. The German and Russian representatives are Rudolph (Matthew Sanders) and Agata (Yelena Shmulenson) respectively. They are fantastic. Mr. Saunders is fluent in German and English and he acts beautifully in either language. Rudolph is a man with the best intentions for the world. And in this case, he sees a problem he can fix. Even if he cannot fix the world, he can at least try to fix this one problem. Ms. Shmulenson is fluent in both Russian and English, and equally effective in both. She portrays both the power of Russia and the lack of agency she has from the men who rule in Moscow.

The translators offer a different dynamic. Diane (Kelly Lord) translates for the Secretary of the Security Council and Conor (Ryan Blackwell) translates for the Russian representative. They are expected to hear and translate, but never engage or share information. Outside of the UN, Diane and Conor live together in a relationship that defined by much more traditional roles. Conor is more senior at the UN, but more hapless at home. Mr. Blackwell invests Conor with a mix of male stupidity, unexpected depth, and venerability.

The final twosome is made up of Fatima (Arya Kashyap) and Pesh (Arif Silverman), two office drones hoping to move into the real work of politics. Fatima is the more driven and invested of the duo but is held back by a gendered assumption that she is one of those “angry and excitable woman.”

The dynamics of all three relationships begin under the same general conditions. The men view these relationships as equal partnerships, if they think about it at all. The working women understand the differences, assumptions, and sexual politics behind the scenes.

The UN's attempt at intervention plays out over months.  During the course of the time, emotions rise up and frustrations run through. Rudolph becomes more and more frustrated at being ineffectual. Fatima is disillusioned by the inability of the UN to bring results or even progress to address to world problems. She is angered as Pesh moves up the hierarchy quickly to where he can affect policy but doesn’t. And she is disappointed in herself that this bothers her.

The United Nations looks at power, expectations, and actual results. It filters the problems and answers at both the international and personal level. The show is not didactic, the woman are not all saints and the men are not all evil. Instead it looks at the humanity in all of the players, and questions the motivations of even the best of us.

The United Nations is a terrific play with the characters laid open on a simple stage. The actors succeed because of both great acting and a wonderful script and direction by Cameron Darwin Bossert. The focus on separate actions is due to the excellent work of Lauren Arneson. It is a show that stays with you long after the night is complete.