Peter & The Starcatcher set for an April 15th Opening

As space opens up on Broadway, so eagerly anticipated shows are beginning to line up.  The latest is Peter and the Starcatcher - the story of how a misfit became Peter Pan.
.
From the Press Release:


.
The producers of Peter and the Starcatcher announced today that the acclaimed new American play by Tony Award nominee Rick Elice, directed by Tony Award-winner Roger Rees and Drama Desk Award-winner and Tony Award nominee Alex Timbers (Bloody Bloody Andrew Jackson), will begin preview performances on Broadway at the Brooks Atkinson Theatre (256 West 47th Street) on Wednesday, March 28, with an official opening night set for Sunday, April 15, 2012.    Based on The New York Times best selling Disney-Hyperion novel by Dave Barry and Ridley Pearson, Peter and the Starcatcher will be produced on Broadway by Nancy Nagel Gibbs, Greg Schaffert, Eva Price and Tom Smedes.  Tickets will be on sale via Ticketmaster starting February 13 and in person at the Brooks Atkinson box office beginning February 20, 2012.
In this innovative and imaginative new play, a company of twelve actors plays some 50 characters, all on a journey to answer the century-old question: How did Peter Pan become The Boy Who Refused To Grow Up?  This epic origin story of one of popular culture’s most enduring and beloved characters proves that an audience’s imagination can be the most captivating place in the world

Alice Ripley at some intimate sites in New York 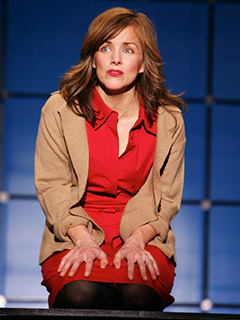 All concerts will include a blend of original songs and covers of crowd-favorites.   Selections for “Daily Practice” include acoustic versions of “Who Will Love Me As I Am” from Side Show, “I’ve Been” from Next to Normal, and “Pinball Wizard” from The Who’s Tommy, all Broadway shows in which Ripley was a member of the original casts.  These concerts come on the heels of Ripley’s solo gigs last month at the Laurie Beechman Theatre.