The Mint Theater Company specializes in publishing forgotten or lost plays, often from British writers of the 1920s or 30s. Their latest offering, Yours Unfaithfully, is a revelation that it could be written in 1933. It is a charming drawing room comedy built around an open marriage and the effects on the married couple in the center.
Stephen and Anne have been married for eight years and have two children. Max Von Essen and Elisabeth Grey bring a real sense of love and carrying to these two people. Stephen has begun to feel unmoored and anxious in the marriage. Anne thinks a new adventure might be the perfect thing to restore his mood and she proposes he be a bit naughty.  This advice doesn't’ come from out of the blue.
Stephen and Anne are progressive thinkers. Anne founded a school because she couldn’t find one progressive enough for her children. As for Stephen, he chaffs under the tutelage of he father, a scholar and pastor (John Hutton in fine form). In fact, Anne herself had affairs out of marriage with Stephen’s full knowledge and support and their marriage is stronger than ever.
Visiting for the weekend are friends Diane (Mikaela Izquierdo) and Alan (Todd Cerveris), and Anne thinks Diane might be just the right fling for Stephen. Diane is a widow and is just coming back to London. Stephen agrees and begins to romance Diane immediately. Any qualms are smoothed by Anne telling Diane that this affair is great by her and will help rejuvenate Stephen.
Yours Unfaithfully is fascinating on several levels. The most obvious is the idea of an open marriage in the early 1930s in England. It runs against our assumptions of the morals of the time. Added to this is that the play was written by Miles Malleson, who famously had an open marriage at the time. He was a well received playwright, but this one was never staged. It is based not only on his marriage, but on the open marriage of the headmaster of the progressive school they sent their children to. Malleson had three marriages between 1922 and 1931 and his take on the idea seems to be ambivalent, if we judge from the play.
When Stephen begins his "mischief", Anne is appalled to find that she is jealous. She views it as a personal shortcoming. Stephen finds that he misses Anne all the more when he isn’t with her. There is a surprisingly unexpected ending, twirling on the assumptions that we make.
The acting here is lovely. Drawing room comedies of manners take a certain talent; the speeches are long an talky and can easily fall into falseness. In this story, Stephen, his father and Anne all engaged in long discussions, explaining positions and ideas. Max Von Essen, on whom the play turns, delivers a perfect performance of a man self-assured and confident in his beliefs. The character of Stephen could easily fall into the cad or braggart category and Mr. Von Essen avoids both.
Director Jonathan Bank, who is also the artistic director of the Mint, does a wonderful job. The Mint sets their plays in period and lets them speak to us in their own language, cadence and charm. Yours Unfaithfully pulls this off marveloursly.
Yours Unfaithfully | Playwright: Miles Malleson | Director: Jonathan Bank | Cast: Todd Cerveris, Elisabeth Gray, John Hutton, Mikaela Izquierdo, Max Von Essen
Posted by Scott at 11:00 PM No comments:

The Present is a new adaptation of an untitled Chekhov play (perhaps Platonov), completion date unknown. Adapted by Sydney’s Andrew Upton, it has been transformed and reset in the Russia of the 1990s during the rise of the oligarchs. A Chekhov play comes with a lot of baggage. We expect long ruminations on life, love and Mother Russia. We expect lots of drinking, anger and betrayal.
What Mr. Upton has added is a bit of humor and lightness, without removing the darkness at the heart of the story. And a kangaroo joke; after all, he is Australian.

The story is complicated, but introduced in understandable bite sized pieces. Anna (Cate Blanchett) is celebrating her 40th birthday at the home of her stepson. Her husband was an older general – now deceased, and she is nearly the same age as her stepson and their group of friends. They are all getting together for her birthday celebration.  Also showing up for the celebration are Yegor and Alexi, two older men vying for Anna’s attention and perhaps hand in marriage (and a cut of her property).

Showing up late and nearly taking over the celebration is Mikhail (Richard Roxburgh), the one time tutor of Anna’s stepson Sergei and his friend Nikolai. Mikhail is a charismatic character, married to Nikolai’s sister. He and Anna had a long since ended affair, but the chemistry is palpable. In point of fact Mikhail’s chemistry with most of the females at the party is strong. It is mirrored by Anna’s effect on most of the men at the party.

And so, The Present explores the aging and changing of both Mikhail and Anna, particularly their response to it. By setting the scene in post-perestroika Russia, we are also witness the partygoers react to the changing of Russia from a Communist regime to something new and scary.  Anna and Mikhail seem competing centers of attention, with the rest of the revelers bewitched by them. The first 3 acts occur at various points the night of the party. We watch as the partygoers deconstruct their own lives until they find the core of their being, or at least what a vodka soaked version of themselves believes is their core. Secrets are revealed, affairs occur.

In the final act, the next morning, repercussions are played out. The ability of women to rebound compared to men is fascinating, even if the conclusions are expected.

The acting, by all members of the cast, is crisp and perfect. It takes a moment to adjust your brain to a play set in Russia where everyone has an Australian accent, but you soon move past that and are swept up in the action. The Present is directed wonderfully by John Crowley, who makes the three hours move by quickly.

Life According to Saki to Travel to New York. 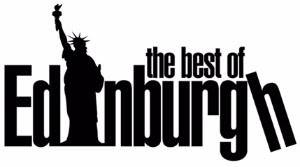 LIFE ACCORDING TO SAKI, winner of the Carol Tambor Best of Edinburgh Award, makes its US premiere at Fourth Street Theatre

New York, New York January 5, 2017—The Carol Tambor Theatrical Foundation is thrilled to announce the US premiere of the critically-acclaimed LIFE ACCORDING TO SAKI, written by Katherine Rundell, based on Hector Hugh Munro (Saki), and directed by Jessica Lazar. Produced by Bridie Bischoff and Tom Grayson for Atticist Productions, LIFE ACCORDING TO SAKI comes to NYC as the 2016 winner of the Best of Edinburgh Award given annually by the Foundation. Performances begin on Wednesday, February 8 for a limited engagement through Sunday, March 5.  Press Opening is Monday, February 13 at 7:30 PM. The performance schedule is Tuesday - Saturday at 7:30 PM; Sunday at 3:00 PM. Please note the following schedule adjustments: there is an added performance on Monday, February 13 for opening; there is no performance on Tuesday, February 14. Performances are at the Fourth Street Theatre (83 East 4th Street, between Bowery & Second Avenue). The ticket price ranges from $22.50 - $45. To purchase tickets, call OvationTix on 866-811-4111 or visit tinyurl.com/Life-Saki.

1916. In the trenches of the Battle of the Somme, a soldier tells stories. That soldier is Saki. Beginning with early misrule and school-age rebellion, his stories move on to the complexities of adulthood - obsessions and games, charm and chaos, friendship and jealousy, and, finally, death. Munro was just over the age of conscription when the First World War broke out. But he joined up as an ordinary soldier in 1914, refusing a commission. He was killed by a sniper two years later.
This debut play by award-winning author Katherine Rundell is inspired by the short stories of “Saki” - the pen name of the early 20th Century British satirist Hector Hugh Munro, described by The Guardian as “a master of the short story.” Like a cross between Oscar Wilde and Roald Dahl, Saki’s creations are witty, absurd, and peculiarly optimistic. Rundell and Atticist Productions bring them to the stage in a production called “a show to savour” by British Theatre Guide.

Email ThisBlogThis!Share to TwitterShare to FacebookShare to Pinterest
Labels: Life According to Saki, Saki

A Few Quick Notes Before We Dive Into the New Year

A few quick notes before we dive into the New Year.  The end of 2016 was hectic and, for me, a bit difficult. Therefore I missed posting about some shows that deserved a great deal of praise.  Two are still playing on Broadway and I want to give you the heads up that you should see them – although the praise of both has been pretty thorough.

It is easy, before seeing it, to strike Dear Evan Hansen as simply a teen angst musical. That observation is both true and woefully inadequate.  Dear Evan Hansen is a brilliant teen angst musical. And it is one that explores how we all react to tragedy and opportunity. It showcases our darkest fears and how we live with our actions. It features a breathtaking performance by lead actor Ben Platt and marvelous staging by David Korins and Peter Nigrini.  See it, it lives up to the hype.

If you are a fan of Off-Broadway, you may have seen this at one of the Ars Nova productions. I saw it in the tent in mid-town. The Great Comet is set in a Music Hall / Bar and so I wondered about the transition to Broadway. I am thrilled to say the transition has been done fabulously. The Imperial Theater has undergone a transformation reminiscent of Studio 54’swith Cabaret, and though the bones are obvious, the theatre feels fresh and alive.

The cast, mainly the same from Off-Broadway has been rejuvenated by the move to the Imperial and the addition of Denee Benton and Josh Groban.  Mr. Groban, aided by a fat suit, plays the depressed Pierre very well, making the most of his chances to shine, but not overwhelming the cast. Denee Benton is astonishing and captivating as Natasha. Her voice is excellent, but her presence is luminous and draws us into the show.  The supporting cast is never anything less than thrilling. It is a wonderful production.