Meteor Shower is Comedic Comet – Luminous and Lovely, then Over

Meteor Shower is hilarious. It is one of the funniest shows I have seen on Broadway and one that fully utilizes the medium. It isn’t a transfer or remake or reimaginering of some other piece. It is a wholly unique show.
Writer Steve Martin has produced sympathetic roles that are stereotypical, somehow both over the top and completely believable. Director Jerry Zaks has let this perfect cast loose on these roles, letting them play broad without dissolving into farce.
Amy Schumer and Jeremy Shamos play married couple Corky and Norm, a married couple from Ojai (a small spa town in the foothills of the California Coast). Corky and Norm are aggressively normal, neurotic South Californians, complete with moments of confessional discussions of marital and personal aggressions. They even start the evening with a pre-wine, you know, the wine before the guests arrive - so it doesn’t count. They both play the “straight man” to the high wire act of craziness provided by Keegan-Michael Key and Laura Benanti.
Key and Benanti play Gerald and Laura, the supersaturated ids of competitive marriage. Gerald and Laura have been invited up to Ojai to watch a coming meteor shower, the darkness in the country more conducive than the city lights of Santa Barbara. They arrive with mayhem on their minds. There is pure joy watching Keegan-Michael Key pontificate on the relationship of the cosmos to his own self-worth. You are swept up in the pure, uncomfortable oddness of the moment.
Meteor Shower provides a bountiful accounting of how far very normal and nice people are willing to go to accommodate the unexpected. Then, after the first third or so, the play tilts your expectations and reruns some of the previous interaction from a slightly different angle, with slightly different results. The replay signals that the audience is in for an multilayered experience rather than a singular narrative.
Gerald and Laura enter again, with more exposition, but different results. The confusion of both Corky and Norm is now reflected by the audience. Here the play spins off into ever more dubious realities, which Schumer and Shamos struggle to cope with. The audience has no problem following, because each moment is funnier than the last.
Go see Meteor Shower to watch fantastic comedic acting. Amy Schumer is simply hilarious as Corky, but is matched by the cast. Everyone involved seems to bring out the best in each other. The laughs will stay with you a long time, the memory of the show might not.
Meteor Shower | Playwright: Steve Martin | Director: Jerry Zacks | Cast: Laura Benanti, Keegan-Michael Key, Amy Schumer, Jeremy Shamos | website
Posted by Scott at 11:00 PM No comments:

Life On The Road As Therapy 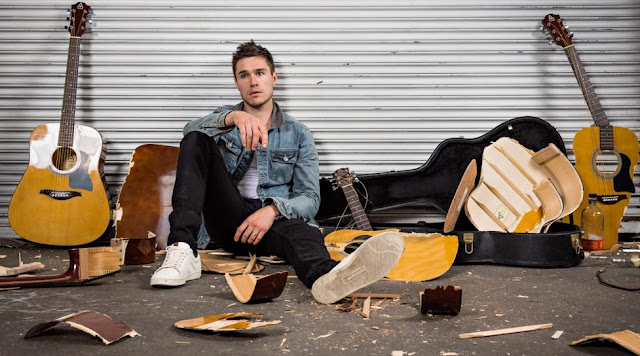 Sam Underwood, a favorite from stage and television, will be at 54 Below on Monday Dec 4th in Losing Days. Losing Days is a one man musical theater piece Mr. Underwood performed at the Edinburgh Fringe Festival. It gives New York audiences a chance to see this well received show and another chance to hear Mr. Underwood's voice - always welcome.
The show at 54 Below has been updated to include “The Boxroom Larrys”. And, part of the proceeds will go to a mental health organization.  See it if you can.
link
Posted by Scott at 11:04 AM No comments:

Romance Doesn’t Fit in a Trapezoid

The idea behind Romantic Trapezoid is interesting - it is an updated take on a 1930s sex comedy, complete with gender role reversal. The lead male character, Dave, teaches film, so the call backs make sense. Unfortunately the show never takes off.
The trapezoid is thus: Melissa (Elizabeth Inghram) is a sexy confident writer who enjoys the company of Dave, three nights a week, and other men other times. Dave (Zack Calhoon) is a love-struck mensch who wants to marry and settle down with Melissa. He has the Miriam Hopkins role here, hopelessly in love with Melissa and unable to force the her into marriage. Beth is the final part of the Trapezoid (all the other men are in one corner). Beth (Joy Donze) is Dave’s graduate assistant, who states she wants to marry Dave so Melissa better decide to take him or leave him. It isn’t clear if Beth is actually in love with Dave or if this is a ruse of Dave’s to force Melissa’s hand. You see, Melissa has the Clark Gable role here: handsome, suave and sure of herself and her sex appeal.  But just like poor dumb Clark Gable, she falls for the ruse, even though she knows it might be a ruse and all is wrapped up by the final reel.
But... a 1930s sex romp can be excused for not showing any sex. Romantic Trapezoid is  surprisingly lacking in romance or sex. And, in the black and white movies, it is funny to see a man get played by a woman. However, in person, it is a little creepy seeing a woman being manipulated by a man into marriage.
Wedging Dave into the role of impotent love toy is both unrealistic and unappealing. Poor Mr. Calhoon is called on to be a wimp, a stud, fun and a killjoy almost concurrently. Then, he is called on to give old movie dialog with a wink and a nod. It does not work. Melissa has an easier time of being a sexy but ungrateful louche. But her transition to jealousy is too generic to be fun.
Joy Donze is the only cast member with a believable story and she makes the most of it. Ms. Donze luxuriates in a role that might have been a throw away. She is hilarious.
Romantic Trapezoid tries to pull off a high wire act of witty banter winning out, just like in the movies. When it works it sparkles, but it doesn’t work enough.
Romantic Trapezoid | Playwright: Victor L. Cahn |  Director: Alberto Bonilla | Cast: Zack Calhoon, Joy Donze, Elizabeth Inghram | website
Posted by Scott at 11:00 PM No comments:

Junk, now playing at the Lincoln Center, is a play full of fantastic acting, interesting staging and intelligent writing. Unfortunately, it is also a depressing call back to the worst of the 1980’s that holds up a fun house mirror to today’s issues, making that horrible time look quaint by comparison. It is not a pleasant evening. Your tolerance for Junk will depend on how much you can appreciate great actors being horrible people.
The story is complex, but not complicated. At its essence, Junk tells the tale of a corporate raider, his lawyer, and the acquiring firm’s CEO and their struggle to acquire a steel conglomerate listed on the Dow Jones. These three are played excellently by Steven Psaquale, Matthew Saldivar and Matthew Rauch, respectively. Steven Pasquale is Robert Merkin, the new Time Magazine Cover Boy of junk bonds and leveraged debt. For Robert Merkin, takeovers are both personal and professional. As a Jewish man, he witnessed his father’s rejection by the (WASP) Wall Street power brokers. Today, his drive and desire to rip apart that world is equal parts revenge, greed and Napoleon complex.
Rick Holmes is Thomas Everton Jr., CEO of Everton Steel, the takeover target. He is a nice guy CEO, although he may be cooking the books a little to save steel jobs in his hometown. His two lawyers are a Jewish man and an African American Woman (Henry Stram and Ito Aghayere) who try to explain the new paradigm of debt financing and the threat to his company. Everton is too rigid, too sentimental and a little too bigoted to make it in this new cut-throat world.
The final leg of the triangle of players is a Chinese American journalist (Teresa Avia Lim) and rich old white power player Leo Tressler (Michael Siberry - who is wonderfully morally superior). These characters provide the extensive exposition and creepy sexual politics.
There are a lot of shades of grey in the morality of this show, but not in the manner you’re used to seeing. Normally shades of grey define the mental conflict of the good vs. the bad guys. Here, everyone is a greedy S.O.B., there are no good guys. The grey here is displayed as some of the characters are, occasionally, less morally bankrupt than others.  America, as defined by Junk, is a fight between greedy upstarts with grudges to bear - who delight in humiliating their enemies, versus greedy white male racists. Women fare poorly, each one in Junk sells out her principals for money or power, often both. Men fare worse, only because there are more of them who provide a greater variety of repulsive moral traits.
Playwright Ayad Akhtar and director Doug Hughes do a fantastic job of explaining the way takeovers are financed, the impacts of “creative destruction” and showing that everyone in America is complicit. Junk might have provided an apt warning against smugness if Hillary Clinton had won the election. In the current political environment, however, it just feels like gratuitous piling on.  The American Dream is dead, we get it.
Junk | Playwright: Ayad Akhtar | Director: Doug Hughes | Cast: Steven Pasquale, Teresa Avia Lim, Matthew Rauch, Matthew Saldivar, Rick Homes, Henry Stram, Ito Aghayere, Michael Siberry, Joey Slotnick | Lincoln Center Website for Junk
Posted by Scott at 11:30 PM No comments:

This news from Towleroad (link) 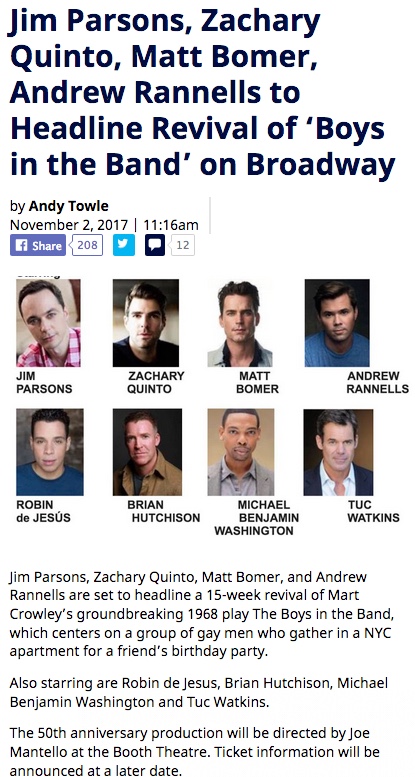 I have to say, I am of a mixed mind on this.

It is an amazing cast. And it is being directed by Joe Mantello - whom I admire as a great director.

But it is a painfully dated show, and ran when there was lots and lots of self-loathing by the Gay Community. And when there was no Transsexual or Bisexual communities.

If not updated, it is a bitch-fest cat fight that will make Kevin Spacey look like the height of enlightened homosexual.
Posted by Scott at 3:35 PM No comments: