By Jeeves to Stream for 48 Hours starting Friday at 2 PM.

If you haven't seen By Jeeves, it is a charming little musical. 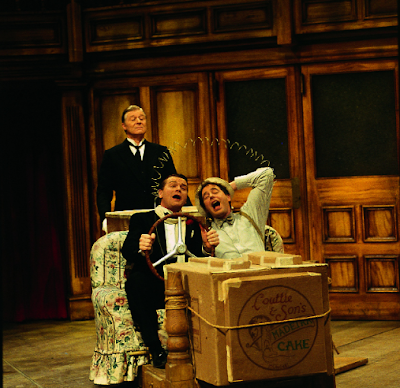 Here is the synopsis provided by the company:
By Jeeves is the musical comedy by Alan Ayckbourn and Andrew Lloyd Webber based on the characters of P.G. Woodhouse. An adventure of the hapless Bertie Wooster (played by John Scherer), a young gentleman about town with a penchant for getting himself into personal difficulties, particularly with women. It is inevitably left to his unflappable manservant Jeeves (played by Martin Jarvis) to provide tify and elegant rescues. Enjoy this outrageous comedy as Jeeves guides Bertie through a series of hapless adventures and improvised chaos. A show that has to beseen to be believed!
I saw this years ago in London, and then once at the Geffen Theater in Los Angeles. I am looking forward to streaming this at The Show Must Go On on youtube.com. LINK It will start streaming on Friday, May 8th at 11am PT / 2pm ET for 48 hours only.
Posted by Scott at 3:00 AM 1 comment:

Classic Stage Company Will Stream Their "Conversations With..." the cast of Assassins

The Classic Stage Company was meant to produce Assassins this Spring, but obviously cannot due to the NY Theater lockdown. However, they have decided to stream a unique feature of their company which I think you will love. During this time when live performance with an audience is not possible, Classic Stage has begun producing new Classic Conversations online, short versions of the popular one-on-one conversation series between NYC's leading actors and their wonderful Artistic Director, John Doyle. Each conversation is an engaging peek into the life and career of the actor, and includes performances of songs that are especially meaningful to them, in a "Desert Island Discs" format (for you BBC Radio fans).

Their current virtual Classic Conversations are focused on the cast of Assassins, with new episodes premiering every Thursday at 6 pm ET on Facebook and YouTube. Previous conversations with Brandon Uranowitz and Will Swenson were delightful. Tavi Gevinson will chat with John on Thursday.
I happened to see their conversation with Michael Cerveris live and it was a ton of fun. He shared great stories about the shows he has been in, his co-stars and throughout Mr. Cerveris sang songs that were meaningful to him.

To watch live or later on, visit CSC's Facebook page at www.facebook.com/classicstagecompany or the Classic Stage Company channel on YouTube. And for more information and the upcoming schedule, visit www.classicstage.org/classicconversations.

I hope you will find the Classic Conversations a welcome reminder of what to look forward to when our theaters are able to open their doors again. And if you enjoy them and are able, please consider supporting CSC at www.classicstage.org/CC. Like most not-for-profit theater companies, Classic Stage is utterly reliant on community, government and philanthropic support while its seats remain empty. 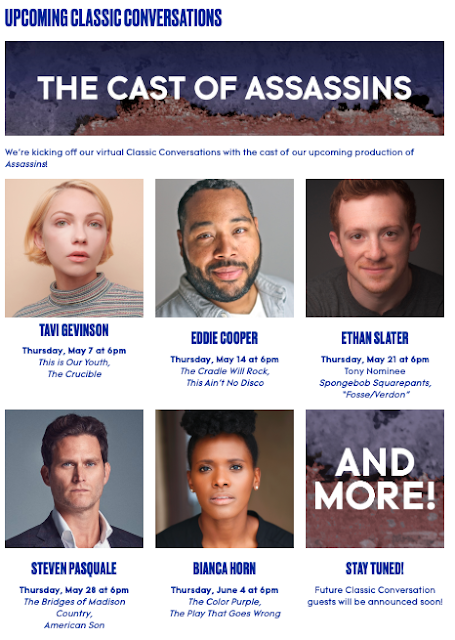 The Female Genius is a Welcome (Semi) Return to Theater

The current lockdown in New York has upended theater. Live venues are closed and both artists and viewers are struggling with how to present stories. Luckily for the viewer, there are some interesting things happening now that have been in the works previously. One of the best experiences is The Female Genius. Originally planned to be presented live on stage at the Wild Project and streaming at the same time, The Female Genius is available for streaming now. It is presented by Thirdwing, a digital theater company. The streaming version was completed, and the live version was in rehearsals before the lockdown was announced. Thirdwing is now presenting the streaming version of the show.

The Female Genius is a series of six vignettes look at great female writers. The proceed forward in both time as well as self-assuredness to make a coherent whole. Because Thirdwing was created as a digital company, the production values of the episodes are excellent. These were created and are meant to be streamed, echoing back to the teleplays of the 1950s or 1960sin which the theater setting is quite obvious.

Viewed in order, the women at the heart of these stories become more confident and independent over time – with one exception. The acting ranges from very good to excellent. Interestingly the performances are captured in a unique way. They are not shot from the perspective of a theater audience perspective. They are shot with close ups, cuts and the full complement of the visual vernacular. Slight sets and a single location mean the viewer is always aware this is a play, but the scenes pull the viewer into the story without forgetting it is a theatrical experience.

The Female Genius focuses on 6 women: Mary Shelly, Emily Dickenson, Gertrude Stein, Ayn Rand, Zora Neale Hurston and J.K. Rowling. None of these are one person monologues. Their struggles and processes are featured as they work through interpersonal dynamics with friends, lovers, admirers or enemies – sometimes in the same person.

In the first Mary Shelly confronts her own insecurities with Lord Bryon. It is an easy and light tale of struggle. In the second, Emily Dickenson berates her sister over access to her. Emily has no use for admirers in general and a male publisher in particular. In the third, Gertrude Stein grapples with her relationship with Alice. B. Toklas by mimicking male misogyny. At the halfway point in streaming these, the themes of male and female relationships seem to take over as Ayn Rand delivers a bonkers performance, that is stereotypically Ayn Rand. Maja Wampuszyc captures Rand in all her glory.

But in the fifth vignette, the story of Zora Neale Hurston deepens the narrative. Ms. Hurston was a black artist grounded in the Harlem Renaissance. This piece focus on her views on segregation and respectful treatment in the 1950s south. Delissa Reynolds, as Hurston, and Timothy Thomas are wonderful.

Finally, there is a story of J.K. Rowling that fails to take off fully. The actress (Meghan E. Jones) is great, but thematically we arrive back near the beginning of our story, with a woman who doubts herself and her craft.

The Female Genius works excellently as a whole experience. Playwright Rachel Carey provides six wonderful worlds that are fictional, but believable.  Working with Ms. Carey, Director Cameron Bossert creates an immersive world for the 7 – 10 minutes we stay with each story. Check them out.