The Glass Menagerie - A Beautiful Revival

"Haunting and lyrical" or "trite and predictable", The Glass Menagerie, Tennessee Williams’ first major success, provokes a lot of anticipatory judgment before the audience ever walks into the theater.  The power of this cast, particularly but not limited to Cherry Jones, upends conventional wisdom.  This Glass Menagerie balances the tried and true with updates that draw the audience into the show.

Journeyman artist Celia Keenan-Bolger takes on the difficult role of Laura.  Laura is a whiny wisp of a thing, overpowered by her mother and her mother’s memories of her own youth.  Ms. Keemam-Bolger handles the role well, making the moments of hope entrancing, while keeping the moments of anguish from overpowering the story.  Laura is crippled both emotional and physically; one leg refuses to move as she wants.  Her condition piles on insecurity to her already shy demeanor.  In a house where her mother has a huge personality and her brother disappears nearly every night, Laura is weighed down by expectation and pity barely disguised as oversolicitous behavior.

Cherry Jones plays mother Amanda as self-involved but unaware woman who’s interest in others is defined primarily by how much they are interested in her. Her performance is stellar, refracting every conversation and interest into a reflection on her.  Amanda weighs oppressively on both Laura and Tom, her son played by Zachery Quinto.  Mr. Quinto plays Tom subtly, with a controlled emotion that only slowly reveals itself to be fury and claustrophobic dread.

The Glass Menagerie takes place in a small depression era apartment some years after Amanda’s husband and the father to Laura and Tom, has left.  Both Amanda and Tom worry that the frail Laura will be a spinster, lost in her world of glass knick knacks – they will have to take care of her always.
Through Amanda’s pushing, Tom finally brings home a young man from the job in order to set up Laura.  Brian Smith plays the Gentlemen Caller – Jim.  Mr. Smith does a hell of a job with the role, managing to transform himself and Laura in front of our eyes.

The staging and pace of the show is beautiful, if slower than modern audiences are familiar with.  Director John Tiffany has brought the play forward as a period piece without making it feel dated.  This Glass Menagerie will stay with you long after you leave the theater.

A Hidden Jewel: The Noguchi Museum in Queens 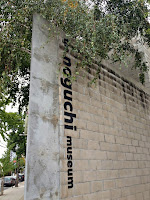 An unassuming brick wall, across the street from the Costco, is the façade to a quiet and beautiful small museum in Queens.  If you weren’t headed for the Noguchi Museum, you would never even notice it.  But it is well worth the trip.

Isamu Noguchi was a famous artist, known primarily for large-scale sculpture, public works and landscape design.  In 1985 he founded the Noguchi Museum himself.  The museum bills itself as “the first and only museum in the country to be founded by an artist during his lifetime and dedicated to his work.” *  Which sounds a bit egotistical, but seems more created to showcase his unique design aesthetic.

The first space, a concrete pavilion open to the elements, displays a variety of stone sculpture.  The beauty of the pieces is drawn out through cuts, polishing and display.  These pieces are emblematic of the art of removal to bring the natural beauty through the stone.  With names that provoke thought and contemplation, the first gallery is jarring. 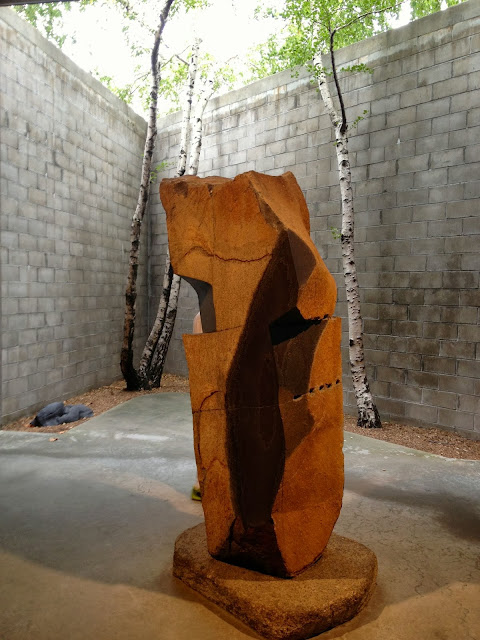 The museum, open to picture taking and sketching, feels different from most displays of artwork.  After just a few moments in this first section, you feel a calming influence that slows the viewer down.  These giant stones are warm, tactile and colorful.  They invite the viewer to linger.


The second area is an outdoor garden, grown mature since the late 1980s, which only expand on the notion that this is a time and location to savor.  The grounds are tended but not overly manicured, evocative of the quiet backyards of resettled Nisei in Southern California.

A small café and gift shop sit at the back of the museum, after the garden, but before the majority of the galleries.  It serves as a pleasant break, and a change from the high pressure “exit through the gift shop” mentality so prevalent in most places.

Smaller galleries covering different phases of his work are scattered as you make your way to the second floor.  Upstairs, some very early works are on view as well as videos on Isamu Noguchi and his work.  There is also space for temporary exhibits.
The Noguchi Museum will inspire you to learn more about this man, and it is surprising.  One of his designs, the Noguchi table is still produced and so ubiquitous that everyone has seen it somewhere. 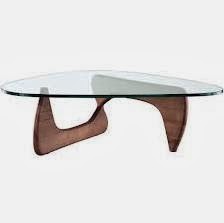 Noguchi was also busy in New York in many artistic endeavors  He designed stage sets for dramas as well as Martha Graham dance works.  He also is known for the steel sculpture on the Associated Press Building at Rockefeller Center.
The Noguchi Museum is a easy trip from New York via subway and a 15 minute walk.  In a city of such vibrancy, it is an oasis.

*From the Noguchi Museum guide.
Posted by Scott at 11:39 AM No comments:

Romeo & Juliet casts a spell, for a while

If there was ever an actor born to play Romeo, it is fair Orlando Bloom.  He is all huge gestures, heartfelt and honest, whilst wearing his heart on his sleeve.  Cast as his Juliet is the wonderful Condola Rashad, veteran of Broadway.  Together they play the doomed lovers Romeo and Juliet in the new production at the Richard Rogers Theater.

Clocking in at a swift 2 hours and 20 minutes with an intermission (swift for Shakespeare), this Romeo and Juliet relies on an audience familiar with the ideas in the play and with some excellent performances to fill in the narrative gaps.  And in the first half it all works well.

Orlando Bloom is very nearly perfect in the role.  Whipsawing from heartfelt loss at his unrequited love towards Rosaline to the joy and rapture upon seeing Juliet, Mr. Bloom is a young man ruled by emotions.  His inhabits Romeo’s athleticism, his grace and his awkwardness with equal ease.  He grows in the character - making this a wonderful Broadway debut.  Condola Rashad, as Juliet, is the child who grows into womanhood when loves finds her.  They have an immediate chemistry that makes the love story believable and pure.

The first act is all bounce and enthusiasm, which makes for a lovely first half - but doesn’t set the stage for the tragedy to come.  This production is dressed in a purposefully unspecified time - the frescos covered with graffiti, the clothes a mixture of jeans and elegant hippy, the walls and balconies made of rock and wood.  It is beautiful, but it works against idea that there is blood feud between the Capulets and Montagues.  Modern enemies rarely have blood feuds.

In this production, the fight that opens Romeo and Juliet is more posturing than confrontation.  The dressing of it as a gang fight is deflated by the lack of ferocity.  It has all the authenticity of the gang wars from West Side Story – the Musical.   (Romeo’s entrance on a motorcycle is just an inane choice, signifying nothing – the less said of it, the better.)  These Capulets and Montagues might as well have argued over a parking spot or had a bidding war for a condo.  Theirs' is a feud of hurt feelings and prestige.  The Real Housewives of New York are more threatening.

The choices make the first act easy and fun, but the same choices deflate the second act.  Both Mercutio and Tybalt’s deaths are accidental and thus Romeo’s punishment, in context of a modern story, rings completely false.  We barely meet Mercutio, Christian Camargo making the most of the slimmed down role.  And we never see Tybalt in anything but a negative light, so it is a credit to Corey Hawkins that we feel anything at all in his death.  Romeo’s banishment is thus an odd choice.  And why doesn’t Juliet go with him?  And why does he get a horse back to Verona, did his motorcycle break down?  (Damn, I wasn’t going to mention the motorcycle again.)


Great and unique performances are given by Chuck Cooper as Lord Capulet and Jayne Houdyshell as Nurse.  Both these two excellent actors are grounded and believable, partially because their choices are consistent with the show and the time. Ms. Houdyshell gives the Nurse real heft, although I admit to missing the comic relief the role usually brings.  And Mr. Cooper rules the stage as a true Lord of Verona. 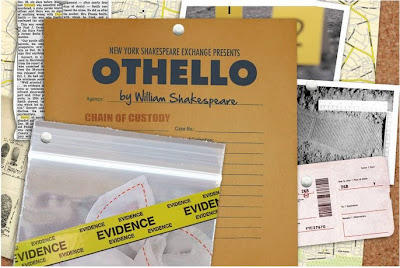 New York Shakespeare Exchange is pleased to announce their next production of Shakespeare's OTHELLO, directed by Cristina Lundy. OTHELLO begins performances on Tuesday, October 15 for a limited engagement through Saturday, November 2. Press opening is Saturday, October 19 at 8 PM. Performances are at Hudson Guild Theater (441 West 26th Street, between 9th & 10th Avenues; C to 23rd Street). The performance schedule is Tuesday at 7 PM; Wednesday - Saturday at 8 PM. There is an added performance on Sunday, October 27 at 2 PM. The regular ticket price is $18 ($10 students tickets, with valid student id, at the door, based on availability). For tickets, call Brown Paper Tickets on 1-800-838-3006 or visit www.brownpapertickets.com. For more information, visit www.ShakespeareExchange.org.

Despite barriers of racism, Othello the Moor has risen to the post of commanding officer and serves with profound integrity. But his honor becomes his vulnerability when he’s mercilessly betrayed by his seemingly faithful comrade.  In keeping with their mission of viewing Shakespeare through a contemporary lens, NY Shakespeare Exchange (producers of this year's on-going Sonnet Project) sets this OTHELLO in a municipal police precinct where diverse cultures converge; where societal preoccupation with appearances and a deeply entrenched culture of racial profiling and violence against women victimize the very people charged with upholding the peace. Can a single villainous mind terrorize even the noblest among us?

Cristina Lundy (director) has worked as a director and assistant director in San Francisco (Exit Theatre), and in NYC (Studio Tisch, Columbia University, T. Schreiber Studios and 3 Roads Productions).  For NYSX, Cristina has directed staged readings of Romeo & Juliet; Spring’s Awakening; and, many scenes for ShakesBEER, NYC’s Original Shakespearean Pub Crawl. She was assistant director on both The Life and Death of King John and Island.  Graduate of Trinity College.

New York Shakespeare Exchange (NYSX) offers innovative theatrical programming that explores what happens when contemporary culture is infused with Shakespearean poetry and themes in unexpected ways. Providing fresh points of entry to the work so that modern audiences will be exposed to the intrinsic power of Shakespeare, NYSX’s goal is to encourage an enthusiastic appreciation of classical theater and to expand the reach of the art form within new and existing audiences
Posted by Scott at 2:32 PM No comments: