Terrence McNally has somehow created a hopeful show out of pain, anger and loneliness at the Golden Theater, were Tyne Daly heads an amazing cast in Mothers and Sons.  Like only the very best of plays, it leaves you at once both anxious and anticipatory of what comes next.

The premise is deceptively straightforward. Tyne Daly plays Katharine Gerard, a formidable Yankee who has dwelled in Dallas since her marriage.  Her son, Andre, died of AIDS almost 30 years ago, and she has come to New York to visit her son’s surviving lover, Cal.

Cal, Frederick Weller playing cautious and wary, has been in a relationship now for over a decade and is now married to his partner, Will.  Tyne Daly and Frederick Weller launch into this odd meeting rather tentatively.  Cal doesn’t know what Katharine is looking for, and it slowly dawns on the audience that Katharine doesn’t either.  Their forays into conversation are stilted and awkward. 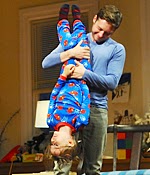 Bobby Steggart plays new husband Will.  Will is younger and unconstrained by any history with Katharine.  He is not happy with Katharine’s unannounced visit, and protective of his husband and their son.  He isn’t shy about confronting this directly and he challenges Katharine’s passive aggressive nature.   Bobby Steggart balances this difficult role nimbly, being direct without ever being bitchy.


Their son, Bud, is nicely played without being overplayed by Grayson Taylor.  An honest and direct child, he engages Katharine and the topic of her dead son without any of the emotional baggage that everyone else carries.

Mothers and Sons covers a lot of emotional territory with a whipsawing of mood swings.  The only false moments are in the manufactured entrances and exits during Bud’s bath time.  You know a real parent would get annoyed long before he returns to the stage.

Director Sheryl Kaller gives the drama plenty of room to play out, letting the comedic moments shine, without losing the edge.  Mothers and Sons deals with loss and acceptance, it could have as easily been about the loss a child to cancer.  The void, the lack of closure, the pain and the humor in the face of it are nearly universal.  This show packs a wallop that is unexpected.
---------------
Mothers and Sons
Playwright: Terrance McNally
Director: Sheryl Kaller
Cast: Tyne Daly, Frederick Weller, Bobby Steggert, Grayson Taylor
Website
Posted by Scott at 11:00 PM 2 comments: