The author of Dear Jane is Joan Beber, who has made a name for herself with her paintings and performance art. Here she is expanding into the territory of playwright and is not as successful. The best parts of Dear Jane are the imagery and paintings. These visual pieces tend to keep the continuity of the show together, working against a confusing non-linear and non-traditional structure.
Dear Jane is seemingly the story of the author, Joan Beber, here called Julie (Jenny Piersol). Juie is writing the story of her life in vignettes. Julie is a twin of Jane (Amada Rose), and many of the vignettes are framed as letters or discussion between the two women. We move in time between 1940s and the present as Julie grows up, gets married, gets divorced, gets degrees and creates art. The story is a reflection back onher own life.
This life story is told in a non-linear format, with jumps and starts in the order which the fictional Julie is ready to tackle her demons. Julie gives us clues as to what is important, what is still painful and what she has come to terms with.
This technique is further complicated by the manner in which the play is presented. Dear Jane is presented as a rehearsal by a community theater group. This gives the playwright the ability to not only reorder things in the play, but to change that reorder on the fly in this “rehearsal” and for everyone to step out of character. Either format, the non-linear storytelling or the rehearsal path, would be challenging, but together they force the audience to really work in order to follow the show. It is often not successful.
There are some touching moments, some beautiful singing and some very trite moments. Throughout the show, the specter of Jane haunts the stage. Sometimes Julie and Jane interact, sometimes they eye each other wistfully and sometimes Jane watches the proceedings with a detached bemusement. It is unclear if Dear Jane is an explanation, an apology or proclamation, and the wandering ghost of Jane doesn’t help clear it up.
Outside of Jane and Julie, the other five actors play various roles, major and minor. The acting is exceptionally good, but the characters are rather one dimensional – which makes sense since these are Julie’s remembrances of the characters. I found Dear Jane more rapid-fire musings than a fully realized play. I think the author’s background in performance art may not be serving her well in this medium.
Dear Jane | Playwright: Joan Beber | Director: Katrin Hilbe | Cast: Holly Cinnamon, Jon Kovach, Jenny Piersol, Amada Rose, Machael Romeo Ruocco, Brandon Timmons, Santina Umbach | Website
Posted by Scott at 11:00 PM No comments:

The Road to Edinburgh for Dickless – Part 1
Last summer I watched a few plays being read at Mass Rhetoric, a showcase put on by the Fundamental Theater Project (link). One of those show in the early stages was Dickless, being performed by Lauren Downie and Tessa Fairey. I was impressed with the play and the players and so I was pleased to see that the Fundamental Theater Project is taking Dickless to the Edinburgh Fringe Festival and showing it at 59E59 before it heads out. 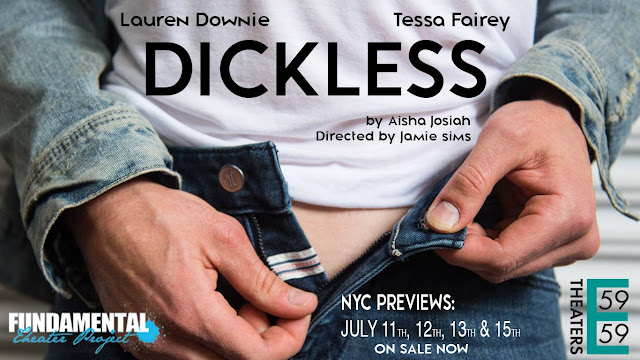 Last week I sat down with Lauren Downie and Tessa Fairey, along with playwright Aisha Josiah, Director Jamie Sims and FTP Artistic Director Sam Underwood. We discussed Dickless, the process of creating the show and the road to Edinburgh. The interviews are not word for word here, but based on my recollection and summary.

What brought you to this piece originally?
Tessa Fairy: It is a pretty universal piece and a highly emotional journey by the characters. These characters represent the experiences we have all had.
Lauren Downie: When I do the piece, it is easy for me to use my own Scottish background, because I know people like these characters. People that are struggling and going through their problems.
TF: It’s the same for me. These characters can be found in England or Scotland or the US.
Aisha, did you do that purposely?
Aisha Josiah: No. (laughter) I mean I knew it was going to happen, but I wrote Dickless from my perspective. My mother is English and my father is American, so I never felt fully part of either culture. I am have always felt a little “different” from my peers and that comes through. And everyone, at some point, feels different. So that experience is universal.

From my perspective, the format of the play is very British. That is, a character talking to the audience; and not just talking to the audience like a one person play, but telling a story.
AJ: I never really thought of it that way, but my background is partially British, so maybe that’s it. And people have said my writing is more poetic than some of my American peers. I’m not sure that is a good thing.
Sam Underwood: Part of it, the British part, is a joy of language and story-telling. I think it goes back at least to Shakespeare, you see that we love telling a story, even when it is told by a single person.
Jamie Sims: Part of it is also the dynamics of the English system. We still have an active radio drama outlet in the BBC.
LD: You can see that a lot of the actors have done BBC radio dramas – where the voice inflection is the tool you have to use. So we are more comfortable using the format.
TF: And, from an acting point of view, it can be very powerful. The 59 E 59 theaters just put on Iphigenia in Splot and the audience reaction was excellent. (Note: Iphigenia in Splot was part of 59E59 theaters “Brits Off Broadway” program this year.)
LD: The audience and reception was great. Even though there were some idioms and jokes that the US audiences might have missed, the emotion came through and people loved it.
Have you made a lot of changes since it was in your Mass Rhetoric show?
TF: Not a lot of changes. The biggest, of course, is that Lauren and I are alternating nights now instead of alternating halves with the character shift. That has required some rethinking to get our own voice.
LD: When we did the show first, we each started with a character. Even later when we shifted characters, you can’t help maintaining the choices the other actress did. I ended up doing the character of Saff in the same way that Tessa did. And she did the character of The Oli the same way I did, because I did it first.

So has that change be tough?
TF: It has a bit. It means that I have to find this person all over again. Jamie has been great with that. He has pushed me and Lauren to really give find that second character of our own.
LD: Jamie has been great doing that. And he came in late to the process, but he came right up to speed.

In part two, we will look at the change in directors, what the FTP has in mind for Edinburgh and the decision to showcase the play in New York before it head to Edinburgh.

tickets
Posted by Scott at 12:35 PM No comments: