The Disciple is a Study in Contradictions

The new, live presentation of The Disciple by the Thirdwing theatre company premiered at The Wild Project and told a riveting tale.

On a very simple level, it is the story of Ayn Rand told through the eyes of her protégé and future best-selling author, Nathaniel Branden. But you can’t summarize the story that simply. The Disciple is many things: a tragic love story, a coming of age story, the story of self-deception, and an argument both for and against Ayn Rand’s “Objective Consciences”. That the play succeeds on all counts is a tribute to writer / director Rachel Carey and cast of Maja Wampuzyc and Cameron Darwin Bossert.

Nathaniel Branden begins the story, and marks the chapters in it, at the foot of the stage, lecturing to a group about his latest self-help book. The play echoes the format of his book “The Six Pillars of Self-Esteem”. Early on, he explains that his theory of Objective Consciences comes from his studying under Ayn Rand.

His mini lectures / talks with the audience are expanded and punctuated by the presentations into his relationship with Ayn Rand. What follows is an overview of their relationship and how it morphed over time and guided Nathaniel’s career. Nathaniel first came to Ayn as a “disciple”, one her Objectivist students that worked and supported her. But Nathaniel was more than that. He was her follower and her lover, even though they were both married.

The Disciple provides a unique glimpse into their well-known affair, and how Ayn justified this through her philosophy. Taken literally, this would be a boring lecture, but combined with the view into their relationship and how Ayn’s justifications changed over time, The Disciple shows a rare venerable side to Ayn. It shows emotion in a woman who doesn’t believe in emotions, a dichotomy she cannot come to grips with. Balanced against a lover and devotee that she, ultimately, cannot control.

The scenes with Maja Wampuzyc and Cameron Darwin Bossert show these two at ease and control of their characters, with a chemistry that lights up the play. 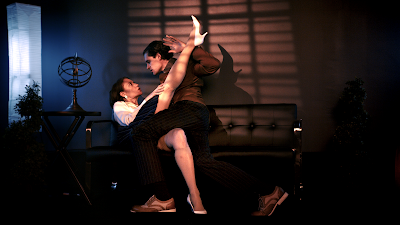 I thoroughly enjoyed The Disciple through its multiple lenses. The acting was terrific, and the Wild Project provides an intimate space. At 80 minutes it is a quick dive into fascinating people that are more complex than we think. (Note: Proof of vaccination required.)

A Raucous Wake in Olde Dublin

The Wake of Dorcas Kelly is a glimpse into the lives of the women of an “inn”, a brothel in Dublin in the 19th century. Dorcas Kelly, once the proprietor of the establishment in question – now the corpse, is laid out for toasts, eulogies, and unexpected revelations.

The primary mourners are three of the women that for Dorcas; Siobhan, Myra and Kate (Irina Kaplan, Florence Scagliarini and Phoebe Mar Halkowich respectively). These women, wildly different, share the bond not just because they are prostitutes, but because they are independent in a male dominated world. And the world outside is in a riot to get in to attack the women, not for the profession but because they stole Dorcas’ body from potter’s field to give her a proper wake and burial.

The main male characters in the show struggle to keep up with the women. Willian (Eamon Murphy) is hired to keep the mob at bay, although he comes into the wake frequently to give updates, partake in spirits and try to make time with the women. Tom (Nicolas Thomas) palys the part of a customer trying to make an honest woman of Siobhan, which she wants no part of. And Father Jack Dancy (Adam Belvo) wakes up in the brothel to be told to give Dorcas a proper send off.

Siobhan and Myra play the two women well, but expectedly. Whores with a kind heart underneath the make-up and prickly exteriors. Kate, on the other hand, is taking over Dorcas’ business after being an employ and the money woman for a while. She is not willing to give up what freedom she has in order to join the ranks of respectable woman. Kyra Jackson plays Fannie, a worked that married into the respectable society. She drops by repeatedly, supposedly to pay her respects, but more realistically because she still misses the comradery of Inn. Frannie achieved the “dream” of marriage and the good life, only to be rejected by rest of society and looks to the women as her friends.

The Wake of Dorcas Kelly is a comedy first and foremost. But it also explores the power and limits of the power which these women have gained by operating outside mainstream society.. Siobhan and Myra are tempted by the better life but are aware that this means a loss of autonomy.

Well written and directed by Sara Fellini, The Wake of Drocas Kelly explores the power dynamics of the age, without sacrificing the story or laughs to get there. My one complaint would be the accents which range from New York Irish bartender to unintelligible Dubliner. They are all good, but some require such a struggle to understand, you lose the plot for moments.

The Wake of Dorcas Kelly is a welcome return to live theater that entertains and makes you think. That is a pleasure to enjoy after so long without it.

The Wake of Dorcas Kelly

The Cell is a remarkably intimate space to watch Jackie Hoffman work her magic. Those who have seen her - live in the theater, singing at Joe’s Pub or in many television appearances - appreciate her great talent in overwhelming the stage while not overwhelming her costars. In Fruma-Sarah (Waiting in the Wings), her myriad of talents are seen through a completely different prism. What if this multi-talented woman had been born into a different, and lesser, life.
In Furma-Sarah, Ms. Hoffman plays Ariana Russo, an ex-housewife devoted to community theater in central New Jersey - which is kind of like Broadway’s cousin, once removed. For those that don’t know, or don’t remember, the character of Fruma-Sarah is a comedic cameo in the musical Fiddler on the Roof. You don’t have to remember, or even like, Fiddler on the Roof (something I rarely admit to) in order to love this show. The main references are to the songs from the show, which are part of the American zeitgeist.
Ariana is hilariously bitter about the politics of local theater, her failed marriage and still bitter, albeit less hilariously, about how life has retreated from her.  Ariana is locked into a flying harness, waiting until she enters as the dream witch, emerging from the wings, high above stage left. Meanwhile she holds court over a captive stage manager – a wonderful Kella Kingsella who grows during the performance. Ariana, enjoying her forced audience of one, rifts on marriage, life in the suburbs and her delightfully petty feuds with the local gate-keepers of community theater.
It is a treat to watch Kelly Kingsella, as stage manager Margo, try to keep Ariana quiet, semi-sober and awake until her entrance at 1:07 in the show. Fruma-Sarah (Waiting in the Wings) runs in real time as Fiddler in the Roof drags on off-stage, which means both Ariana and Margo have a deadline. Will Ariana fly on time? Will Margo’s walls come down? These two women not only command the stage, they invest the audience in the outcome. You can feel the tension as the audience realizes how much time is left.
The writing by E. Dale Smith is astounding. He captures the joy, wonder, and disappointment of theater life, whether on Broadway or in a small theatre in central New Jersey. The direction by Braden M Burns is fast paced but emotional, funny, and sensitive. He unrolls the layers of the character and her isolation, slowly, lovingly and with a perfect cast. I also have to call out the lighting by Dan Alaimo, which brings backstage during a show to life.
Fruma-Sarah, L’chaim.
Furma-Sarah (Waiting in the Wings)
Director: Braden M Burns | Playwright: E. Dale Smith
Cast: Jackie Hoffman, Kelly Kinsella | Website
Posted by Scott at 8:16 AM No comments: