Hello Dolly is an old school musical. You can either try to update it somehow, or hire a star and revel in the revival. Director Jeffery Zaks decided to go full on traditional, using Gower Champion’s staging and turning the full wattage of Bette Midler on to a willing audience. And it works marvelously.
Hello Dolly is a star vehicle, a Bette Midler is a star that carries it with ease. The audience loves every minute she is onstage, and she loves it as well. As times when her smile is turned up to 12, you see the happiness under the character, this is a showman that loves to connect with the audience.
For those few that don’t know the story, Bette Midler plays Dolly Levi, a matchmaker and more. She has set her eyes on Horace Vandergelder, the famous Yonkers’ half a millionaire. Horace is played by an always fun David Hyde Pierce, who is too pleasurable in the role to complain about his in and out accent. Dolly has been hired to find him a wife and has procured one Irene Molloy, haberdasher and widow from New York City.
Horace sets out to New York, without realizing he has a house full of trouble. He has a niece that wants to marry an artist. Two store clerks that want an adventure and Dolly Levi who wants Horace for her own. Songs, laughs and mayhem ensue.
The clerks (the always excellent Gavin Creel* and the perfectly cast Taylor Trensch) meet Mrs. Molloy and her assistant, Minnie Fay at the hat shop. Dolly and Horace enter at the same time and tales are spun as to Cornelius’ wealth. Horace leaves, determined to find a more suitable new wife, and Cornelius and Barnaby find their New York adventure by escorting Irene and Minnie to dinner. Kate Burton plays the lovely Irene and Beanie Feldstein is great fun as the bubbly and charming Minnie Fay. The couples have a nice and light chemistry. 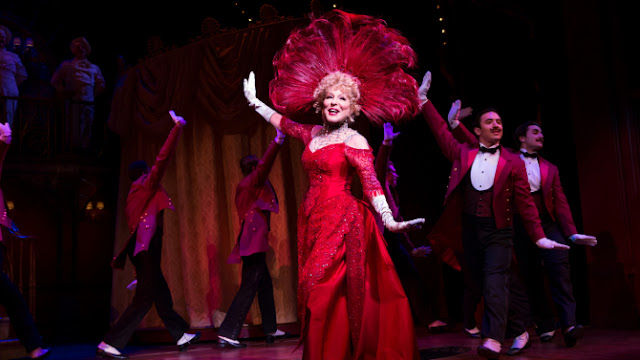 The show really revs up in the second half, where all parties converge on the Harmonia Gardens, a swank restaurant that Dolly hasn’t entered in 10 years, since her husband passed. The most famous dance numbers and songs play out here. Personally, I am not a fan of the song as a rule, but the raucous and wonderful delivery and energy sold it to me. It is a showstopper in the true sense of the word.
The show wraps up tidily – and you except nothing else.
Hello Dolly delivers exactly what you expect, but delivers it so perfectly you end up getting swept away. Bette Midler’s performance is excellent, and on the rare moments when she falters she easily moves back into her persona that also fits the play. Her years in Las Vegas playing The Showgirl Must Go On have taught her well.
The show has a large cast and many moving parts, both figuratively and literally in terms of staging. Director Jerry Zaks and Choreographer Warren Carlyle have done great work. I never saw the Gower Champion version, so I don’t know how much was changed, but did I love this show.
* I also attended one performance where Mr. Creel's understudy, Christian Dante White, performed fantastically in the role.
Hello Dolly | Book: Michael Stewart, Music and Lyrics: Jerry Herman | Director: Jerry Zaks | Cast: Bette Midler, David Hyde Pierce, Gavin Creel, Kate Baldwin, Taylor Trensch, Beanie Feldstein, Will Burton, Melanie Moore, Jennifer Simard, Kevin Ligon
Posted by Scott at 11:30 PM No comments:

Indecent Spins a Tale of Hope

Indecent surprised me in the best possible way. As you walk into the Cort Theater, the actors are sitting onstage under a sign explains this is the story of a little Jewish play. The colors, the actor’s outfits and the set are all various shades of drab. Waiting for the play to begin you don’t feel excitement as much as resignation that what will follow will be more a history lesson as drama.
And the start of the play seems to reiterate that understanding, the players stand, dust draining from their outfits in a move that seems less solemn than portentous as they introduce themselves as types not characters. We are they shown the beginning of a playwright’s first drama, God of Vengeance. This is the play within the play that the story refers to. It is 1907 Yiddish play that tells the story of a Jewish family where the father runs a brothel and the wife and daughter live about it with him. The daughter and one of the prostitutes fall in love and openly kiss and embrace on stage. The father is furious and angry and crushed, condemning his daughter to prostitution for her sin.
The playwright shares his draft with members of the artistic community in Poland, who are dumbfounded by the show. They cannot believe that Sholem Asch would expose this part of the community and hold it up to ridicule. They withdraw support, trying to explain that stories of Jews written by Jews should be uplifting, not examples of horrid behavior. The one person who finds the beauty of the play and the love of the women, is a simple farmer, the cousin of one of the men, Lemmel (a fantastic Richard Topol).
Sholem and his wife venture to Berlin and, with a troupe of players, find great success with God of Vengeance on the Berlin stage. Success follows as they tour with the play throughout Europe and ultimately into America.  When success off Broadway translates to a Broadway run, the play is altered. The gentle love between the girls is twisted to be a seduction and exploitation of the daughter, in order to placate the censors. It doesn’t work. On opening night the show is shut down and the players arrested.
At this point, playwright Paula Vogel’s Indecent takes a wondrous and unexpected turn. The focus moves from the troupe and the actions of the police to the reactions of the community and playwright Sholem Asch. The “established” Jewish community of New York is aghast at the drama, echoing the original Polish Yiddish complaints that it shows the community in a negative light.  Sholem, who was so passionate in Poland in defense of his play, is dismissive of it now, some 16 years later. He is tired of being know only for this one play; he’s moved on to writing novels and embarrassed by his lack of English. He abandons the troupe, the play and his friend Lemmel who has faithfully shepherded God of Vengeance for years.
Indecent raises the question, who owns outrage and story? Is it youth; is it the creator who is allowed to withdraw it at will? These questions grow organically out of the material and force you to think. And it isn’t a Jewish question. African Americans have asked it when they hear Rap that will offend others. Gay Americans ask it as they watch a parade that they are sure would shock their mothers. Christians Americans ask it when they see a car with Jesus bumper sticker cut off someone else on the road and then flip them off.
Indecent answers the question as well, by showing a single scene from God of Vengeance. The moment in time owns it, the actors own it and the viewer owns it. It is a singular moment that deserves to be judged as performed.
Director Rebecca Taichman has created magic at the Cort Theater, helped by Production Designer Tal Yarden - who’s simple and evocative set keeps everything clean and clear. At the end of Indecent I stood, a bit in wonder, that my preliminary expectations were so wrong. Indecent pulls magic out of the air every night. And the players give it to the audience.
Playwright: Paula Vogel | Director: Rebecca Taichman | Cast: Katrina Lenk, Mimi Lieber, Max Gordon Moore, Tom Nelis, Steven Rattazzi, Richard Topol, Adina Verson, Matt Darriau, Lisa Gutkin, Aaron Halva | Indecent
Posted by Scott at 11:00 PM No comments: