There is no excuse for not knowing what you are getting into when watching Re-Animator The Musical.  It’s based on the Horror Comedy movie Re-Animator, a cult classic.  If the title doesn’t tip the audience off as to what is in store, the “splatter zone” and the ponchos should warn you long before the show begins.
.
With the ground rules firmly in place, Re-Animator The Musical provides great goofy fun along with faux gore aplenty.  Re-Animator is the story of good guy Dan Cain and his roommate, the slightly unhinged and defiantly obsessed Herbert West.  Dan is a med student coming to grips with the reality that he can’t save all lives.  West is a med student working to upend that reality with a green goo that re-animates dead tissue – and brings the dead to life.
.
For this formula to work, the cast needs to walk a fine line.  Graham Skipper as Herbert West is frenetically fantastic as the manic student mad-scientist.  He is out to revolutionize the world and, by happy coincidence, humiliate Dr. Carl Hill.  Dr. Hill (played by Jesse Merlin) plagiarized the young West’s Swiss mentor, and has plans to do the same thing to Herbert.  Mr. Skipper hams up the proceedings with wild abandon - bringing audience along with him.
.
But for good camp to work, there must be the innocents.  In Re-Animator The Musical, those innocents are Dan and Megan.  They are love struck sweethearts in Medical school, alternate repelled and seduced by Herbert West’s breakthrough.  Rachel Avery plays the role of Megan sweetly, with just enough backbone poking through her doe-eyed wonder to be believable.  It helps that Ms. Aveyr has a lovely voice and a fresh presence.  But it is Chris L. McKenna as Dan Cain that steals much of the show.  Mr. McKenna plays him as a cross between Dudley Do-Right and Florence Nightingale, with a dumb jock body.
.
Misters McKenna and Skipper combine to make Dan and Herbert a great team.
.
George Wendt plays Dean Halsey, Megan’s Father, bringing a little sit-com star power to the proceedings – he nails it in the opening scene as an excitable Swiss Nurse.  I know a big guy in bad drag was stale back when William Frawley did it in I Love Lucy, but it sets the tone perfectly.
.

Into the Woods Is Coming

I saw Into The Woods a long long time ago in a galaxy far away.
.
Actually it was pre-Broadway in San Diego at the Old Globe.  Standing Room!
.
It was great, however the only casting change for Broadway was Bernadette Peters (I saw Markie Post - seriously!).  Anyway, there is a process to enter a daily drawing for free tickets.  Go to http://shakespeareinthepark.org/ to see how.
.

Email ThisBlogThis!Share to TwitterShare to FacebookShare to Pinterest
Labels: Into the Woods, Public Theater, Shakespeare In the Park, Upcoming

Hell: Paradise Found is a funny and lighthearted look at the assumptions we make with regards to the afterlife.  Produced by the University of Alabama, this show is probably reaching a much less religious audience here in New York than it would in the South.  But Hell: Paradise Found neither depends on religion, nor does it mock the religious among us.  The show is a simply a different way of looking at Heaven and Hell.
. 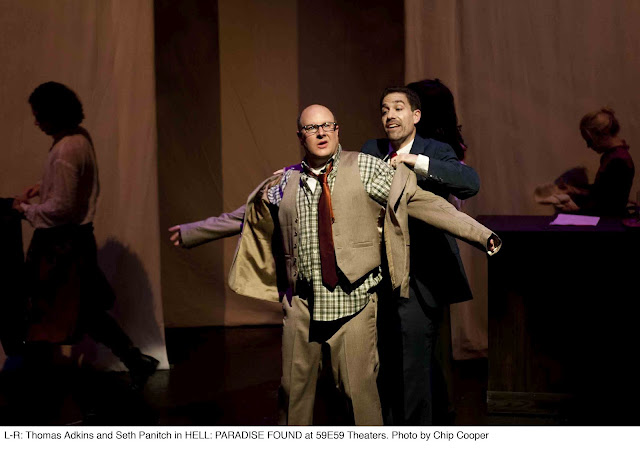 It all starts as Simon Ackerman, everyman lawyer played by Matt Lewis, wakes up in an Interview room trying to catch up with an Interviewer determined to hurry through the process.  It is pretty quickly explained that Mr. Ackerman has passed away, and after a cursory interview is sent off to Heaven.  But, when Hell is denied to him, Hell suddenly intrigues Mr. Ackerman.  He sets out to find why he isn’t accepted into Pit of Doom.  And he finds that assumptions, particularly about the afterlife, can be right and wrong at the same time.
.
Playwright Seth Panitch has taken a clever idea, and expanded it into a well written piece.  It is a play that treats religion respectfully, but without undue reverence.   In Hell, Mr. Ackerman sees a litany of characters, Mother Teressa, Lizzie Bordon, Don Juan - but not Princess Di, she is in Heaven.   God and Lucifer make an appearance as well, old friends across the millennium.   Only Archangel Gabriel is portrayed unfavorably, Gabriel is an officious toady in Hell: Paradise Found.
. 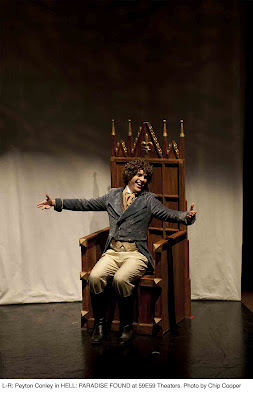 The acting is best when limited to a single character, Dianne Teague as God and Seth Panitch as The Interviewer both turn in first rate performances.  Most of the rest of the cast is enthusiastic but inconsistent.  They are often excellent in the well written roles, Eve, Gabriel or Don Juan for example, but they are less convincing in quicker roles that rely on the audiences’ familiarity with them, Vlad the Impaler, Shakespeare or Lizzie Borden.  Regardless, many of these actors show amazing promise and you should keep an eye out for them in the future.
.
The energy the cast gives off is engaging.  Occasionally a joke will fall flat, but another comes right up so the pace doesn’t flag.  The cast never gives less than 100% and their joy is infectious.
Hell: Paradise Found is a fun show, see it and enjoy.
--------
Hell: Paradise Found
Playwright and Director: Seth Panitch
Cast: Matt Lewis, Dianne Teague, Chip Persons, Lawson Hangartner, Peyton Conley, Alexandra Ficken, Stacy Panitch, Seth Panitch
Website
Posted by Scott at 10:00 PM No comments:

Musical: Chaplin Coming in the Fall

ON THE BIG NEW MUSICAL ABOUT THE LITTLE TRAMP!From small-time London music hall performer to big-time Hollywood icon, mere words cannot describe the incredible rags to riches story of Charlie Chaplin. And now that remarkable story comes to life — on Broadway — in CHAPLIN THE MUSICAL. The scandalous affairs. The spectacular divorces. The famous friends. The mortal enemies. CHAPLIN THE MUSICAL takes you behind the scenes and behind the undeniable genius who forever changed the way America went to the movies.Featuring a book by three-time Tony Award® winner THOMAS MEEHAN (Hairspray, The Producers, Annie) and CHRISTOPHER CURTIS, music and lyrics by CHRISTOPHER CURTIS, directed and choreographed by WARREN CARLYLE(Follies, Hugh Jackman, Back on Broadway) and introducing ROB McCLURE as the legendary silent film star, this big musical about the little tramp shuffles into Broadway sooner than you think—this summer! So don’t miss your chance to save now on the first show of the season.


Previews begin August 21 (Website)
Posted by Scott at 9:00 AM No comments: 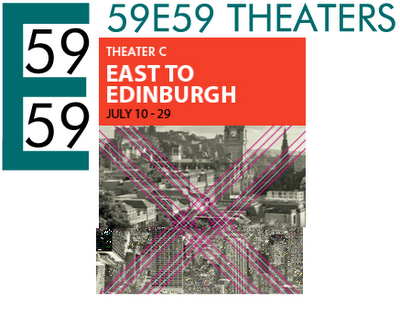 The 59E59 Theaters are hosting a number of shows that are heading to the Edinburgh Fringe.  This is a great chance to see some new shows or catch up on some you might have seen already.
.
The Showcase starts on July 10th with two shows.
. 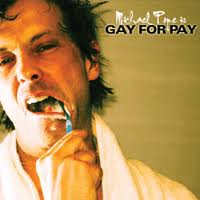 Micheal Pope is Gay For Pay
.
A Stranger than fiction tale of a man taking a mystery job in the Empire State Building and discovering himself to be the world's greatest phone sex operator.
. 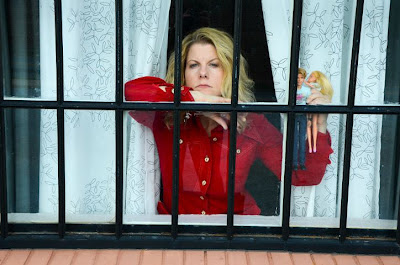 
Dirty Barbie and Other Girlhood Tales
.
Spinning tales on scarlet fever, scotch over ice and girls gone wild, DeeDee Stewart puts the 'fun' back in dysfunctional.
July 10, 11, 12 and 14 @ 9PM
Posted by Scott at 9:39 AM No comments: