A very good performance can turn a so-so show into a very good show.  Leap of Faith is a good show that is transformed into an excellent show by a few of the best performances I have seen this season.
.
The premise of Leap of Faith, based on a little seen movie of the same name, is wafer thin and runs like this:  A for-profit tent revival minister and his troop of chorus “angels” are stuck in a backwater town in the middle of nowhere.  The town is out of money, out of hope and out of rain - and the revivalist is here to take the last of their money and hope.  It gives nothing away to say that miracles happen, faith is restored and hope comes back to Sweetwater.
.
It is a clunky premise that hums like a Ferrari because the cast is amazing.  Raul Esparza plays Jonas Nightingale, flim-flam preacher extraordinaire.  He wears the preacher’s cadence and magnetism so effortlessly that it is a shock when he drops them outside the pulpit.  Mr. Esparza reveals the huckster underneath the preacher, and then the damaged man underneath the huckster.  He is winning on nearly all levels, even when caught in the middle of a lie.  And his voice, caged a bit in the gospels numbers, is left to soar or whisper in the other songs, always appropriately.
.
Jessica Phillips plays Marla, the Sheriff that is both Jonas’ love interest and his antagonist as he works to bilk the town.   She sees right through the revival, but has a son who is a true believer.  Ms. Phillips projects a weary sadness that brings unexpected depth to the thin story.  She can also turn on a dime to flirt with Jonas, or to raise her hackles as a mother protector who knows things are going to end badly.
. 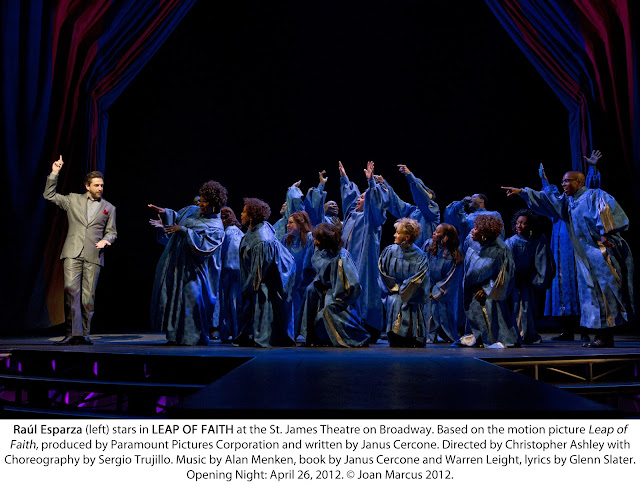 One the singing front, Kecia Lewis-Evans plays Ida Mae, mother hen to the chorus and bookkeeper to the revival.  The character has to walk a fine line between believing in the Lord and believing in Jonas.  Ms. Lewis-Evans does this, while belting out songs that raise the roof.  Her larger than life character is a bit of a stereotype (as are most characters in this show), but she effortlessly transcends that.  Particularly as Ida-Mae deals with her two children, Isaiah and Orenlla – played by Leslie Odom Jr. and Krystal Joy Brown respectively.  And these two carry their parts easily.   In particular Ms. Brown can take control of a scene with a simple look and swagger.
.
Kendra Kassebaum as Jonas’ sister is very good, but outmatched vocally.  However she brings a bracing bit of backstage honesty to the play.  She stage manages the lies and keeps the team ready to go.  Rounding out the cast is Talon Ackerman as Marla’s son, in need of a miracle.  He is admirably reserved in a role that many a child actor would ham up.
.
The songs, by Alan Menken and Glenn Slater range from serviceable to fantastic.  To be honest, gospel music isn’t my favorite genre; and so the second half, built on a more traditional musical theater dynamic, worked much better for me.  But I can appreciate the craftsmanship, particularly mixed with the vocal talent onstage.
.
As for the direction, by Christopher Ashly, it is masterful.  Mr. Ashly has provided the right touch in this show.   If you are interested in going to see Leap of Faith, do so now, while this cast is in place.  You would be hard pressed to find a better one.