Marry Me A Little: Sondheim Remixed and Wonderful

Keen Company’s first musical is Marry Me A Little Me, a new work of Stephen Sondheim’s music which was conceived and developed by Craig Lucas and Norman Rene.  The Keen Company, and the audience, is extremely lucky to have the talented Jason Tam and Lauren Molina perform this piece.  These two, who might be able to pull anything off, are giving excellent material in this show.

Marry Me A Little is the story of two single people, expressing their fears, hopes and desires through music.  The songs are often not well known; about half of them were cut from the original shows.  Stripped of orchestration and reduced to simple piano accompaniment, the emotions of the songs shine through these two characters.
.

Jason Tam and Lauren Molina are a man and woman (billed in the program only as “Him” and “Her”) who live in similar apartments on floors 2 and 3 in a building in Brooklyn.  Both are starting new lives after a failed relationship.  This premise allows the characters to sing, usually in duet, about the circumstances they face.  The characters inhabit the same space on stage, but perform as if they are in separate apartments with the same layout.  They sing together, but don’t interact, except very rarely in a fantasy scene.
.
Under other circumstances this artifice might not work well, but these are two excellent actors and singers.  Jason Tam plays a man who should be perfectly happy.  He is single, attractive and free in New York, which celebrates all of these attributes; but he feels something is missing.  Likewise, Lauren Molina is attractive and living the single life many women might dream of in a Sex And The City sort of way.  But both of these characters are missing someone to share their lives with, and it tugs at them.
. 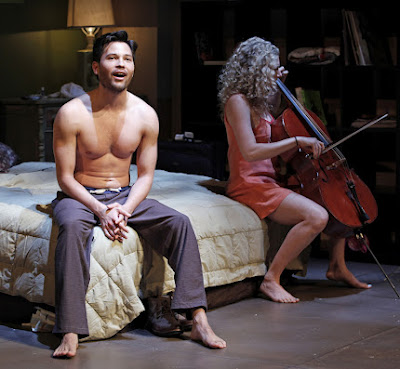 Mr. Tam has an expressive voice and physicality which works on stage to pull the audience into the story.  He is magnetic.  Ms. Molina is an amazing singer, with a face that carries expressions clearly, letting the audience share every emotional high and low.  I saw Ms. Moline in John Doyle’s Sweeney Todd as Joanna, and she effectively pulls out the cello in this show as well.
.
The versatility of these two performers is amazing.  Ms. Moline in particular is given some well-known numbers, and she rises to sing them to full effect.  Mr. Tam’s job is often to sell a unknown (or less famous) number to full emotional heft, and he does it extremely well.
.
The both manage to create chemistry, even though they aren’t suppose to inhabiting the same physical space.  Their work, directed by Jonathan Silverstein, is spot on.  They sell both the dream of a partner as an ideal, as well as the reality of actually being in love – with all the problems that come with it.
.
One warning about the music, it is very typically Stephen Sondheim.  While many people love his music, the dissonance of his tunes annoys some.  For myself, I loved it, but I know that others might not.   If you like Sondheim, Mr. Tam and Ms. Molina will keep you wonderfully entertained for an evening with Marry Me A Little.
---
Marry Me A Little
Music & Lyrics: Stephen Sondheim
Development: Craig Lucas & Norman Rene
Director: Jonathan Silverstein
Cast: Lauren Molina, Jason Tam
Website
Posted by Scott at 9:35 PM