Macbeth Scores as Spectacle and Passion 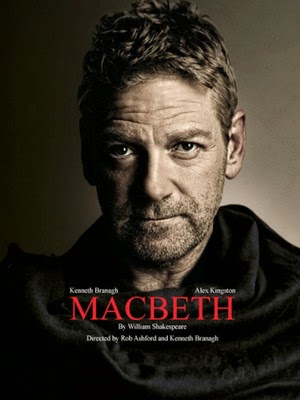 Kenneth Branagh’s New York Theater debut has been a long time coming.  Anticipation and expectations can often drown a good performance.  But instead of downplaying expectations, Macbeth, now at the Park Avenue Armory, ramps them up wildly.
.
There is an entire pre-presentation experience designed to overwhelm the viewer, to set your emotional clock to back to the age of chivalry and make you ready to inhabit the world of Macbeth.  (For a spoiler full description, read at the end of the revue.) And the story opens with a wild battle, played out with steel on steel, shouts, blood and combat on this narrow field, now drenched in rain.
.
And then the show starts.  It’s a lot of live up to.
.
For the most part, Macbeth lives up to it well.  Branagh’s Macbeth, however, will not be to everyone’s taste.  This Thane is valiant in battle and excels in scheming, but is less brave hearted when it comes to follow through.  Macbeth second guesses himself, questions his own plans and stalls nearly too long to carry them out.  In this he is lucky, and the rest of Scotland unlucky, that he has a partner in Lady Macbeth, a fantastic Alex Kingston.  The lady supports his plans, executes upon them and quite often supplies the backbone Macbeth lacks.
.
This is the trouble with the play; the hero must be cajoled into action, until the death of Banquo (played robustly by Jimmy Yuill).  This is a turning point for Macbeth.  He is haunted by the death of his old friend, which he had arraigned.  After nearly succumbing to visions of Banquo’s ghost at a dinner, Macbeth recovers.  And, in that recovery where his conscious is defeated, he transforms into a fearsome and fearless ruler.
The company is made up of experience performers, many of who have had extensive Shakespearian backgrounds.  They perform flawlessly, never falling out of the period or the speech and delivering both the saddest of lines and the bawdiest of jokes effortlessly.  A particular stand-out is Richard Coyle who commands attention as Macduff.
.
Kenneth Branagh’s performance is excellent.  He is well matched by Alex Kingston and together they embody the trajectory of greed and corruption.  Their spell is so great, that you often root for these anti-heros.
.
The technical team, lead by Set and Costume Designer Christopher Oram, has made the experience magical and immersive without overpowering the piece.  Music is by Patrick Doyle, who’s first musical score was the haunting Henry V.  He works wonders here as well.
.
Branagh and co-director Rob Ashford have delivered Macbeth as a Spectacle and a piece with real emotion.  It moves quickly, cut to two hours, without an intermission.
------------
Macbeth
Playwright: William Shakespeare
Directors: Rob Ashford and Kenneth Branagh
Cast: Kenneth Branagh, Alex Kingston, Jimmy Yuill, Richard Coyle, Scarlett Strallen, Tom Godwin
Website
.
Spoiler of Pre-Show, Click More to view.

Upon entering the Armory, long before entering the Theater proper, the viewer is classified into a Scottish Clan, given a program and placed with members of your Clan.  The program has the expected cast list and details, but also includes a map of the Clan and the trajectory of your Thane in the proceedings.  It is designed to build anticipation for the show as your Clan is announced into the Drill Hall.
.
And upon entering the Hall, your expectations are built even higher.  From the entrance you walk on a stone path, through the moors towards a Stonehenge-like monolith that anchors one end of the stage.  The seating is arranged  steeply on both sides of a long, muddy pit where the play takes place.  Opposite the monoliths, a stone grotto calls to mind an ancient chapel or stone castles’ keep. Candles flicker as a woman bids her time with her back to the audience.  The lengthy pit reminds one of a jousting field more than anything else.
.
All of this is designed to overwhelm the viewer, to set your emotional clock to back to the age of chivalry and make you ready to inhabit the world of Macbeth.
And the play opens with a wild battle, played out with steel on steel, shouts, blood and combat on this narrow field, now drenched in rain.
Posted by Scott at 11:00 PM