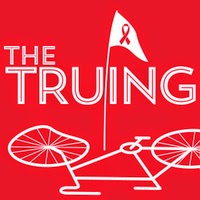 .
The Truing follows these six one afternoon, as they are pressed out of their comfort zones.  They will have to work together to resolve a couple of problems.  In that sense, The Truing shows people struggling to find the inclusiveness of the ride before it became a marketing vehicle.  As these events – the AIDS ride, the Walk for Breast Cancer, the 10K for Heart Health or Aerobics for Multiple Sclerosis - become bigger, they lose a sense of community they once had.  This play explores the reason people take part in these events and the friendships that can grow unexpectedly.  The reasons can often get lost in the quest for donations and the antics of the crowd.  The desire to be part of something and the need for human understanding, drive the emotion delivered in The Truing.
.
That said, this is the Fringe and there are pieces of the show that could be improved with time and more work.  Marion is a little more frantic than she needs to be, and Chickie is a bit too fluffy.  But these are minor points, the show will leave you laughing and feeling better about life.
.
The Truing continues Thursday Aug 14th, Thursday Aug 21st and Saturday Aug 23rd.  See TheTruingPlay.com for more information.
.
The Truing
Playwright: Joe Norton
Director: Douglas Hall
Cast: Stephen Hope, Kathryn Gerhardt, Joel Mark Mijares, Andrew Dawson, Esther Chen, Billy Hipkins
Fringe Website
Play Website
Posted by Scott at 5:13 PM