Reality Washes Past (and Future) In The Summer Pavilion

In The Summer Pavilion is a fascinating journey across possible realities, imported to 59E 59 from the NY Fringe Festival.  But it isn’t some opaque drama / science fiction hybrid which requires you to follow confusing plot twists, it is a simple story told with sincerity.
.
Summer Pavilion opens with a pensive young man Ben (played by the always excellent Ryan Barry) alone on stage, pondering life.  A party at his parents’ house is steaming ahead inside, but Ben is alone in the garden.  In time, he is joined by the beautiful Clarissa (Rachel Mewbron).  With flirting and flattery, she entices him to return to the party.  He is hesitant, but willing to be tempted.  Soon they are joined by Nabile (Meena Dimian) a sensual young man with an eye for both Ben and Clarissa.  As the scene plays out, it is obvious that all three people have been sexually intimate, in every possible combination.  Nabile brings vodka (laced with LSD, Ben finds out later), which he shares to loosen everyone up – and they all then decide to play a game.
. 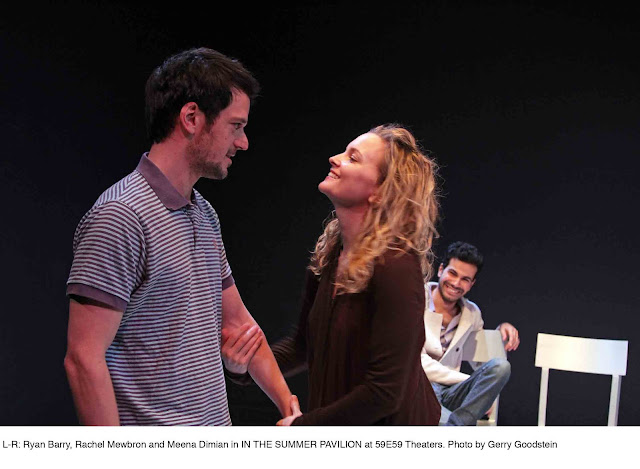 The “game” is suppose to be about guessing the future, but what unfolds is not what they expect.  Ben experiences many possible futures.  He sees what happens if he settles down with Clarissa, and what happens if he settles down with Nabile, what happens if he never settles down, and so on.
.
The outcomes portrayed are all unique and  all plausible.  One of the most interesting things is how different the life choices affect Ben and Clarissa’s personalities going forward.  Their choices lead to vastly different outcomes and levels of happiness.  Nabile’s future, on the other hand, is steadier – although with different levels of fulfillment.  This is a combination of both Nabile's culture and  parent’s wealth.  There is a subtle message that more freedom demands more responsibility.
.
The actors pull the various combinations off with unexpected ease.  Rachel Mewbron’s Clarissa may end up a successful artist, a bitter gallery owner or a bohemian, but her soul shines through in each case.  She is an artist at heart and happy when she is fulfilled.  Meena Dimian’s Nabile will end up a reasonably happy man, who manages to balance his personal orientation with an ability to provide grandchildren to his parents.
.
It is Ryan Barry’s Ben who has the starkest choices to make.  His possible futures range wildly from happily married to mentally unhinged.  Through it all, Mr. Barry manages to create a believe and relatable persona.
.
In The Summer Pavilion is directed by Kathy Gail MacGowan, and she who the complex story straightforward and clearly.   Some people will question the lack of resolution in the show, all the possibilities are presented but there is no indication of which comes to pass.  Others will enjoy the ambiguity and the message that we are the designers of our own fate.  Personally, I wanted Ben’s life to turn out well, I hope he made the right choices.