I admit that I had low expectations for & Juliet. The premise just sounds clumsy, “What if Juliet didn’t kill herself after Romeo?” And a jukebox musical at that, with songs written Max Martin and collaborators. It sounds like the show was cobbled together to try to mimic the success of Moulin Rouge crossed with SIX. I was wrong that it would not be a ton of fun. It is. And, if it is Moulin Rouge and SIX mashed together, it works

& Juliet is energetic, fun and what people expect a musical to be: big, loud, colorful, and overwhelming. It isn’t perfect, but it a blast.

And I will start by saying the cast is fantastic. I don’t want to be redundant and complement each actor, but the singing, acting and casting were first rate from top to bottom.

The story begins with Shakespeare’s wife, Ann Hathaway (Betsy Wolfe). She questions why Juliet has to die in Romeo and Juliet. When Shakespeare (Stark Sands) gives a waffling answer – That is what makes it a tragedy – she convinces him to try a new tack. Let Juliet decide to live and see where it goes. And so, Juliet (Lorna Courtney) escapes her parents plans to send her to a nunnery by running off to Paris. A nunnery is where fallen women are sent. Since Juliet is no longer a virgin , she no use to her parents. Escaping with her are two new friends, May (Justin David Sullivan) and Ann, plus one old friend, the nurse (Melanie La Barrie) from Shakespeare’s original play. 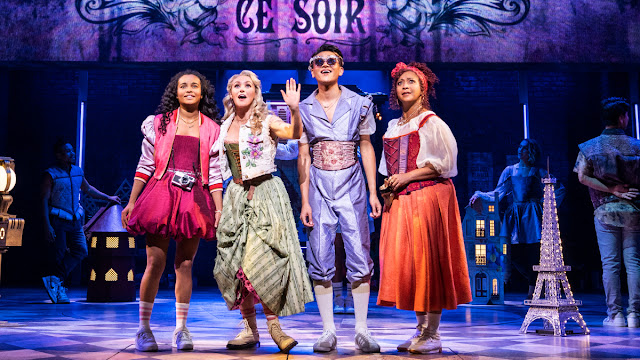 In this show, the star-crossed lovers are the non-binary May and Prince François (Philippe Arroyo) and, The Nurse and King Lance - Paulo Szot lending a adult air and voice to the proceedings. Shakespeare and his wife Ann share the stage as feuding couple with different expectations of marriage. The late arrival of Romeo (Ben Jackson Walker), freshly not dead, complicates the happily ever after for all concerned.

The & Juliet songs, mainly bouncing and upbeat, add to the carnival like atmosphere. With one or two exceptions, the songs fit and and add a layer of comedy. & Juliet adds an inside joke or two that everyone who has seen or heard Romeo and Juliet will understand.

The story here is more gender inclusive with love stories between men and women, non-binary characters and a freedom from stereotypes. But the main moral of the story is that self-empowerment gives a person the freedom to choose who to and how to love. And how being true to yourself might be the greatest superpower we all have.

If this all sounds preachy, do not worry, & Juliet is infused with joy and life. Veteran London Director Luke Sheppard balances the razzle dazzle of the show as expertly as he does the moments of love and heart. Instead of a preachy show about gender, he allows this musical to spread the joy throughout the audience without losing engagement in the story.

& Juliet is good story, great acting and a positive message.