Review of The Master Builder

The Master Builder is long, two intermissions long. One of Henrik Ibsen’s last plays, it is full of imagery, angst and ponderings on guilt. Chris Ceraso plays Halvard Solness, the Master Builder, so wonderfully that the play moves reasonably well, but by the end of the second intermission one realizes the show is a lot longer than it really need be.
. 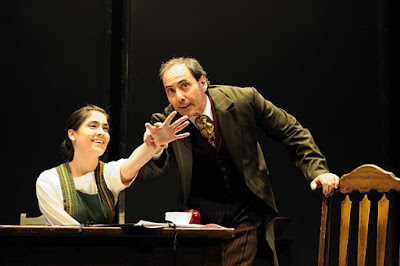 On one level, The Master Builder is a complex story of a man at the height of his power, but afraid of losing it all. The arrival of a young woman, full of sexy worship brings the insecurities and fears of Halvard Solness to the fore, but her arrival also triggers a reckless youthful streak of bravado in the Master Builder. There is much discussion of trolls, mind control and the meaning of responsibility. One cannot help but think that if this 50 year old guy just got a hooker and a Miata – he would get through his mid-life crises a lot easier.
.
Perhaps it is the long Norwegian winter darkness that foists this insanely constricting emotional detachment from life. Perhaps Lutheranism is more restrained in practice in Norway. Whatever the case, there is a lot of navel gazing to sit through – and no matter how well acted I began to hate Ragnar and Knut and Aline and Kia. I wanted them all just to blow up and get on with it.
However, this is not to be. This being a 19th century Norwegian drama there must be much talk of duty, heavy sighs and swallowing of deep felt emotions. It was all done well. Susan Ferrara plays Mrs. Solness with appropriate gravitas of a woman who’s life has fallen out of control on the altar of her husband’s ambition. Mrs. Solness is all Norwegian sturdiness and reserve, bound in a costume that is as constricting as the role she plays.
.
Jennifer Gawlik plays a young woman in the Master Builder’s thrall, only to be ignored once a more exciting woman enters the scene. Ms. Gawlik’s young heart visibly breaks when Mr. Solness is done with her. It is a rather thankless role that Ms. Gawlik plays very well.
There is another story of a father and son who work for Halvard Solness, Knut and Ragnar Brovik. They represent the men that the Master Builder has used in his quest to reach the pinnacle of his profession. But the characters are marched in and out so mechanically the only need to have been referred to, perhaps they were more important in the original language, but in translation the audience needs to imagine that they play a great symbol of the Master Builder’s ruthlessness. This is in a play with plenty of symbols enough!
.
Sarah Stockton plays Hilda Wangel, the brash, exciting, sexy young lady that enters Mr. Solness life and immediately captivates his. Ms. Stockton handles the coquettish duties easily. Her attractiveness is matched by a zest for life. She breaths fresh air into a stuffy situation. Ms. Stockton cannot help to bring to mind the young Kate Winslet, the freshness interwoven with a woman coming into her own sexually. It is clear why the captivating Hilda Wangal awakens the youth in the Master Builder.
.
Director Eric Parness stages the scenes well, and lets Mr. Ceraso pull the audience along with the show as long as he can. However, ultimately The Master Builder feels dated, and, as it is in repertory with The Glass House, feels less connected to architecture than expected.
---------------------------------------------
The Master Builder
Cast: Chris Ceraso, Susan Ferrara, Sarah Stockton, Brian D. Coats, Peter Judd, Pun Bandhu, Jeffifer Gawlik
Director: Eric Parness
United Stages at Theatre Row, May 9 – June 15th in Rep
*
Rating: If it sounds interesting to you
*
What works: A good version of an Ibsen Show.
*
What doesn't work: Slow and long
*
What you get to brag about to your friends: A great Ibsen show
---------------------------------------------
Posted by Scott at 9:08 PM