Danny and the Deep Blue Sea is an early work by John Patrick Shanley which has lost none of its power over time.  As presented by The Seeing Place Theater, it is a vibrant and emotional story exploring venerability and redemption.
.
The story is relatively straightforward, while exploring emotions that are jagged and complex. It opens as Danny bursts into a bar nursing cuts, bruises and bloody hands.  He is a violent, anti-social young man who is quick to anger and itching for a fight.  He is constantly on guard for perceived slights, and he sees them everywhere.  In this nearly empty bar he meets Roberta, an aggressively bitter woman.  Roberta needles Danny with the intensity of a child picking at a scab.
.
Danny and Roberta, two outcasts both with a chip on their shoulder, end up flirting but they could just as easily ended up at blows.  Erin Cronican as Roberta and Brandon Walker as Danny pull off the difficult task of making these characters both frightening and sympathetic.
. 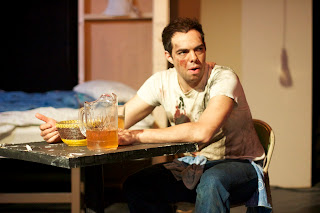 Mr. Walker’s Danny is coiled so tight that every moment he doesn’t lash out only adds to potential explosion coming.  He conveys Danny’s mental state in nervous shakes and fractured phrasing that never cross over to caricature.  Ms. Cronican’s Roberta is revealed more slowly.  She is obviously angry at the world, and she vents the anger in bursts, sometimes aimed at Danny, but more often aimed at the world in general.
.
Danny is a fighter, full of rage and prone to outbursts.  His co-workers call him “the beast”.  Roberta is a bitter single mother, living with her parents and mad at the world.  She takes joy in antagonizing Danny, because she is at least getting a response from another person.
.
These two end up spending the night together, and the pieces of their life are pulled out and examined.  Sometimes the stories are told with prompting and other times they are thrown up, like some sickness they can’t hold in.
. 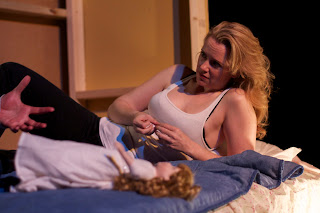 Ultimately Danny and the Deep Blue Sea is an examination of the emotional connection between people that have lost the ability to communicate.  It is a moving and great show.  Director Ariel Francoeur and her actors have created an intense experience - full of surprise, apprehension and unexpected tenderness.  The show has been extended this week, see it if you can.